Arrows are very old and familiar objects, recognizable by anyone who can talk. They’ve been around since before recorded history, after all, and were invented long before the wheel. Although Neanderthals probably didn’t use arrows, early humans did, and that might explain what happened to the Neanderthals. If we try to explain the arrow we can say that it is like a little spear you shoot into the air—a long bullet made of wood, stone, and feathers. 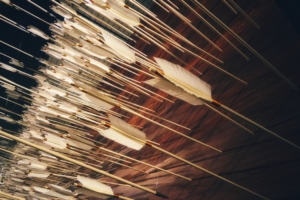 But it’s more than that. It is a bespoken sculpture, an elegant geometric tool, beautiful, useful and at the same time deadly.

Early bows and arrows allow some insight into the origins of human intellect. The fact that they were invented more than 71,000 years ago is evidence that we humans began to think and act like modern people early in our evolution; understanding materials, observing physics, inventing and using new technologies, conniving smarter ways to prevail and endure. One trick of human intelligence is converting ideas to symbols. We like to translate big ideas into simple marks that represent those things, like how a musical note illustrates a particular sound and the action a musician must perform to make it. Thus, the weapon was turned into the graphic design you see on street signs.

What do arrows as weaponry represent?

What the arrow means depends mostly on how it’s depicted. Here are some interpretations of many different tattoo designs.

An arrow on a Bow: A nocked arrows being pulled back on a bowstring might represent potent readiness, a high point of tension, or intense focus or aim. If it was just released from the bow, it marks the end of waiting and stillness, a sudden transition to motion and forward momentum. An arrow can shoot forward only after it has been drawn back on the bow, so it could also represent the momentary setback before a blast of activity. A nocked arrow can also represent the zodiac sign of Sagittarius.

Arrowhead: The arrow’s tip is, obviously, the deadliest part. It’s also the part that will last the longest.

Broken Arrows: A snapped arrow might represent pacifism or peace. If a marksman breaks an arrow intentionally, it might signify the end of the battle or a resolution to stop fighting. It could also mean impotence or thwarted desire. Someone might get this design to show they are breaking away from old patterns and starting anew.

Compass Arrows: An arrow bisecting one of the compass’ points might represent a definite plan, plot, scheme, or a brave new direction. The addition of the compass turns the arrow into a guided missile, one that can travel a long distance and still hit its mark.

Crossed Arrows: When the arrows are cross to form an X it is a sign of friendship or truce. Many friends get matching tattoos with this design.

Diamond-Headed Arrow: Since diamond is one of the hardest materials, an arrowhead made of diamond might represent invincibility.

Feather-Arrow: Feathers and arrows are perfect together, both aesthetically and symbolically. They are both straight, fine-pointed things that convey delicate precision. Feathers are traditionally used as fletching to guide arrows and make them fly more accurately. The feather literally guiding the arrows, and symbolically, a bird might act as a spiritual guide.

Pen-Arrow: Are another pair of symbols that go well together, and can cut equally deeply. This symbol combines physical and verbal threats—the pen’s marks on the page are mental, while the arrows are physical.

Single Arrow: The lone arrow might represent self-defense or protection from harm, independence, power, purpose, direction, or aim. It might also be a phallic symbol.

Which Direction Is the Arrow Pointing?

It is very important for the tattoo design where the arrow is pointing. Here is what various orientations might mean:

Downward: In Native Indian culture, an arrow pointing at the ground represents peace. The eyes drawn down to the ground indicate that there’s something important below. This might signify being grounded or point to something buried. A tattoo of an arrow pointing down one’s arm toward the hand can indicate a flow of energy out into the world (like an arrow being shot by the arm).

Upward: If it’s pointing to the sky, it might be a reminder to look up and consider the bigger picture, an omniscient perspective, or a bird’s eye view. You might shoot an arrow into the sky to send a message or a warning.

Horizontal: This might represent the horizon itself, or distance. There’s an implied threat to anyone the arrow points at, so it could also indicate protection or defense.

Two arrows pointing in opposite directions: This often represents war or conflict, having to face two directions at once in an alert and vigilant defense. It might mean that someone is battling someone or something in their lives.

Circular: It might indicate time (moving forward clockwise or counterclockwise), evolution, or returning back from where you came.

This is one of the most popular tattoo designs in recent years. From the things that we have discussed above its the right thing to say that its a design with a deep and profound spiritual and historical meaning and value.