Hindu mythology comprises of narratives found in Hindu texts like the Vedic literature and epics like Mahabharata and Ramayana. Hindu mythology is also present in widely translated popular texts like the Panchatantra and Hitopadesha, and Southeast Asian texts too. Hindu mythology doesn’t usually have a consistent and monolithic structure. The same myth typically appears in different versions, and it may represent it differently around socio-religious traditions.

Various philosophical schools modified these myths over time, especially in the Hindu tradition. These myths usually have deeper and symbolic meanings and have many different interpretations. Hindu mythology has many different mythological creatures that find their uses in tattoo art. Such creatures are always an attractive and interesting motif for beautiful and powerful tattoo designs.

One such tattoo design is the tattoo of the monkey god named Hanuman. Below, we are going to talk about who Hanuman was, and what Hanuman tattoos mean. 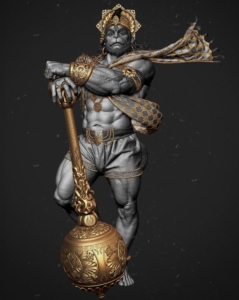 In Hinduism, Hanuman is the divine monkey god and the ultimate devotee of Rama. Lord Hanuman was the ideal “Brahmachari,” and it is one of the central characters of the Indian Epic Ramayana. He is even present in Mahabharata, as well as several other texts.

Hanuman is the son of Anjani and Kesari. He is also the son of the wind-god Vayu, who according to some stories, played an important role in his birth. Hanuman is a human, except that he has its body covered with white hair and the face and tail of a monkey.

We said that Hanuman is one of the central characters in Ramayana. However, the evidence of devotional worship to him is missing in the texts and archaeological sites of the ancient period. The theological importance and devotional dedication to Hanuman emerged about 1,000 years after the Ramayana’s composition. Bhakti movement saints like Ramdass and Samarth expressed Hanuman as the symbol of resistance to persecution and also of nationalism.

In the modern era, his iconography and temples were increasingly common. People see him as the ideal combination of strength, heroic initiative, as well as assertive excellence. They also see him as a loving, emotional devotion to his personal god Rama.

In later literature, he was the patron god of martial arts like wrestling, acrobatics, meditation, and diligent scholarship. He is the symbol of human excellence of inner self-control, faith, and service to a cause.

Hanuman was the mythical monkey God in the time of Rama, and according to legends, we are invincible. He has powers that are far greater than humans, including the ability to fly.

The Thai school curriculum includes some stories about Hanuman and portrays him to be the god that leads a monkey army. The aim of this army was to get rid of the world of unwanted spirits. His main traits were bravery and humanity, and he was the hope for humanity.

Hanuman was not a God but managed to attain high levels of spirituality like a deity, hence demonstrating to a man that a mortal being can rise above the shallowness of our worldly plain.

Hanuman tattoos usually protect the bearers from dangers or make them become fearless in the face of adversity. Hanuman can strengthen self-confidence and influence people for you.

There are many different variations of Hanuman tattoos. Some versions of this monkey God are more common among women who want to have a better relationship with their partner. Moreover, it helps people stay focused and gives the needed determination to seeing something with a successful conclusion.

A hero in the spirit and in many deeds, Hanuman symbolizes qualities of selfless devotion and unshakable belief. In the most famous story of this devotion, he has a pearl necklace from Sita, the wife of his Lord. This was on the occasion of the coronation of Rama. However, after receiving it with much humility, he decided to break each pearl with his teeth. When Sita inquired in astonishment as to the purpose of his actions, he said that something interesting. Hanuman said that he tried to discover if any of the pearls contained his beloved Lord Rama. He did that because he did not keep anything that was devoid of him. When Sita asked him if he kept Lord Rama within himself, he did something strange. He opened his chest and showed that both Sita and Rama are there.

For instance, in Thailand, Hanuman tattoos are especially powerful, but also potentially harmful. Also, the effects of Hanuman tattoos on societies may be hard to control.

Known for his courage, immense strength, and wit, Hanuman is an excellent motif for tattoos. The character, which is a monkey, became a favorite among the readers of the epic Ramayana. Because of this reason, many people who love this epic choose Hanuman tattoos as their permanent body ink. This means that this tattoo design is most common among these people. However, others can choose it because of its interesting appearance, and its meaning in Hindu mythology, of course.