The ram is a symbol that looks strong and meaningful anytime but looks better as the centerpiece of a bigger tattoo project. For those who don’t know, a ram is the male of a sheep. When thinking about the image of rams slamming their skull into each other, we think about the male bighorn sheep. These animals are strong and significant and thus have a lot of symbolism related to power and strength.

Rams are the male bighorn sheep. Their place of living is the mountain. These animals often settle their disputes by ramming heads into each other. There is a difference between a ram and a mountain goat. 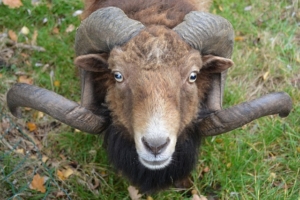 Typically, this animal is five to six feet tall and weighs between 260 to 280 pounds. However, some rams can grow to over 300 pounds. Rocky Mountain bighorns have horns so big, and they can consider more than the rest of the bones in their body combined. The Ewes or female bighorn sheep can reach a weight from 30 to 40% less than the males.

Bighorn sheep live in the North American Rocky Mountains. This area stretches from Canada, down through the western U.S., all the way to Mexico. Due to their split hooves with rough surfaces, they’re capable of balancing on boulders. This is the reason why a ram can stand on a ledge that is only 2 inches wide. They not only stand on these tiny ledges but jump up to 20 feet to climb these mountains.

During the mating season, rams are smashing their heads together repeatedly until one of them gives up. They also fight to resolve who is going to be the leader.

They do this without being injured since they have bendy horns that absorb almost all colliding shock. Also, they have a mechanism that slows the blood flow from the head back down to the body. This creates a layer of protection. Moreover, because most rams live at heights, the fluid in the cerebral venous system increases.

In many cultures, rams are prominent figures, and they are a symbol of initiative, action, leadership, and determination. This is the Aries symbol, a symbol of rulership in the astral or heavenly realm. Being the first sign of the zodiac strengthens the traits of ram-like power and leadership.

Being the first signs of the zodiac is why the Aries symbol also symbolizes virility, burning force, impulsive enthusiasm, and restoration. This explicit sign takes on revisiting the sun’s warmth as the March equinox comes upon us. On top of everything, the ram symbolizes drive, energy, power, force, courage, and protection.

If you read ancient mythology, you can see that there are many gods associated with this animal. For instance, Cernunnos was a Celtic god represented as a ram. Some other versions show him in a snake’s company with a ram’s head to represent power and rebirth.

The architect god of ancient Egypt, Amun-Ra, was always pictured as having a ram’s head.

Besides, Thor was close with the ram and was said to have rams that pulled his chariot.

Other gods with the ram’s associations were Baal and Ea from the Middle East, Agni and Indra from India, Apollo and Zeus from Greece, and the Roman god, Hermes.

The Aries ram tattoo is a very popular one. Many decide to get the ram tattoo in this form with the zodiac and constellations behind such a popular subject.

This skull design is also a very interesting and popular choice. A lot is going on in the ram skull, and the ability of the ram to stay conscious when ramming skulls at up to 40 mph should tell you the symbol is one of strength and endurance.

However, these are just a number of examples of the ram skull tattoo, and there are many more out there. If you have the idea of getting the ram tattoo, sit down with your tattoo artist and help you develop a variation that works for you.