The Shamrock plant is essential is to the Irish, so is the Thistle to the Scots and Scotland. The Thistle is a resilient plant. This is a plant that’s able to grow in places with less vegetation, and it protects itself with a thick covering of thorny, though thorns and spines. On the top of it are a beautiful purple flower, a color historically associated in Europe with aristocracy, royalty, and nobility. 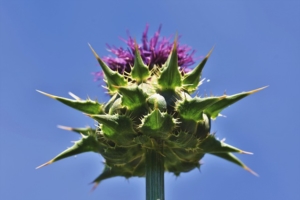 During tough times, poor Scots would steam and steep thistles in boiling water to survive on the verge of starvation. The Scottish Highlanders were every bit as rugged as the prickly plant. The milk thistle was highly valued for its medicinal properties and was grown all over Europe to treat liver and stomach problems. People even used it for food in salads.

The Legend and History Of The Thistle Plant

Legend has it that those thorns or spines, and the prickly Thistle, helped save Scotland from a Viking invasion. Supposedly on a moonless night in 980 A.D., an armed group of Danes was about to attack the camps of Scots when the Danes, who were walking barefoot so as not to make any noise and so sneaked up on the Scots, stumbled through many thistles. Their screams and cries of pain quickly woke the Scots, who won the battle that was joined rapidly, undoubtedly aided by the Danish Vikings’ tender feet!

The symbol of the Thistle, its prickly stem crowned with a purple flower, was featured in the Heraldics of many Highland Clans and Noble Scottish Houses. The Kings of Scotland used the Thistle as their crest and in their Coat of Arms.

In 1687 King James II initiated the unique Scottish Order of the Thistle. It is one of the oldest Scottish orders still in existence. For more than a thousand years then, the Thistle has been a Scottish symbol and has become a symbol of Scotland herself, with the accompanying motto, “Nemo Me Impune Lacessit” – Wha Daur meddle wi’ me – Who dares interfere with me!

Today, many Scottish Associations, rugby clubs, football teams, and other sports organizations feature the Thistle in their logos as a point of Scottish pride and a symbol of decisiveness and toughness!

As a tattoo art design, the Thistle is an unmistakably Scottish symbol and speaks of the pride in being one of the millions of people descended from Scots who scattered around the world. The plant symbolizes pride, determination, tenacity, and toughness in the face of great hardship and long odds.

The Thistle is so very well known around the globe. It can grow in what seems to be in just about any environment or region from North America to Africa, Southern Europe, The Balkans, Western Asia, Australia, and most adored by the country of Scotland. Scotland even put the Thistle on its coins used as currency.

As mentioned, many different types and forms of thistles exist in nature. Choosing which one is best to get a tattoo with so many other thistle breeds can be difficult. Four thistle flowers seem to stick out and are most popular, however. Each of these thistles is unique in its way, and they all have the same sharp, pointy prickly outer body. Meanings behind the plant and the image of a thistle can be potent.

Especially in Scotland, this plant is looked highly upon as a sign of determination, bravery, devotion, and strength. Flowers have always shown a sign of peace. With its rugged exterior and festive purple and green colors, this flower compliments, and evens out its beauty.

The reason for these thorns and prickles is a defense against animals from eating them, mother nature’s way of warning off dangerous predators. Thistles are members of the daisy flowering tribe, Cynareae. Within this tribe, four central flowers are most recognized and placed within this thistle category.

Cynara, Carduus, Onopordum, and the Cirsium are all the names of these central flowers that we call thistle flowers. All four of these plants we call thistles to look a little different from each other and have different purposes, all with the same sharp outer body.

The Cynara Cardunculus or Cardoon is a thistle that has been grown in ancient times in the central and western Mediterranean. This Thistle has a green and grayish stem that fades into a violet purple when getting close to the bulb. Along with the spikes that emerge all over the stem and the flower, this type of Thistle makes a great piece of tattoo art. This specific thistle flower is used as a source of enzymes for vegetarian cheese production.

The Carduus thistle plant is native to Eurasia and Africa but is seen in many different places. These plants are also known as noxious weeds, and this means that once they start growing, they can cover a large amount of land and spread around. These flowers usually grow to 12 feet tall and can be somewhat threatening to humans and animals if eaten. Unlike the Cardoon, which is edible, the Carduus thistle is poisonous and deadly if ingested. This is an attractive flower that is equally fatal.

Onopordum Acanthium, or cotton thistle, or the Scotch thistle, has a different appearance than the previously mentioned flowers. This particular Thistle has a broad base that branches off in every way. With large spiked and prickled stems, what look like wings protrude from the stems with a silky, ribbon-like texture extending from the base of the bright pink to the dark lavender head of the flower. If you want to get this type of Thistle as a tattoo design, it would be to get it in a part of the body where you have enough skin to use all of its spikes and branches.

Cirsium, or the plume thistle, is unlike many other thistles. The Cirsium thistle has feathered hairs attached to their achenes or their seeds. Most of these plants have pink and purple flowers sprouting from their bulbs, Cirsium however, not only has these pink and delicate purple flowers, but they can also produce white and yellow ones.

The tattoo of a Cirsium plant can give you more options as far as the use of color. These plants also do not have as many ‘wings’ sprouting around from the stems.

With all of this to consider, choosing a thistle tattoo should be a little simpler and easier. Choosing the right design for you may be the most challenging part of this process, for we all have specific tastes and opinions when it comes to tattoo art. Tattoos designs of the Thistle should also always be done with color. Okay, maybe not always, but the color is perhaps better for these kinds of designs to get the desired effect.

A black and white tattoo design would not be as vivid as a thistle that had streaks of purple and green throughout it. The color is also significant because, like every flower, the beauty of the petals is what our eye is most attracted to. These tattoos can virtually be placed anywhere on the body; the most popular placements are around the ankle and forearms. If you want this piece to be more discreet, a graphic of a blooming thistle running along the side of the ribs is another excellent place to get this flower tattooed.