The Hindu religion is a powerful one. It originates from Nepal and India, and many people subscribe to the Hindu religion from all corners of the Earth. One of the fascinating aspects of Hindu is the fantastic imagery that is present in religion. This religion has multiple gods and various symbols in the texts. 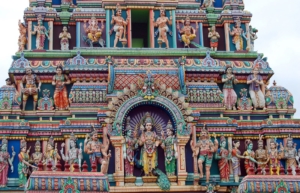 They all make for a powerful tattoo in those who believe in the Hindu way of life. Being a Hindu is how a person who affiliates with Hinduism refers to themselves. Some of these people might even decide to get a Hindu tattoo somewhere on their body to represent their strong faith. Many symbols can be designed and tattooed that might be considered a Hindu tattoo. Furthermore, there are a lot of gods in the Hindu religion. Among them is Vishnu, whose image is often used as a tattoo design.

Vishnu is the supreme god of Hinduism and one of the three deities of Hinduism. His name in the religion is the Preserver and Protector. It has often been described with gray or blue skin and four arms. The lower left-hand holds a lotus flower (associated with the female and from which emerges, Buddha). On the other hand, he is holding and maintaining the mass. He holds a conch shell and spiral Sudarshana farm on the opposite hand in the upper left hand. It is usually presented on Garuda, the king of birds defeated by the god and now serves faithfully, transporting the cosmos.

In Hinduism’s sacred texts, Vishnu is declared Supreme Lord Brahma, creator, and master of unlimited universes. It is the essence whose existence was above all else, the master of the past, present, and future. Form a trinity with Brahma, the creator, and Shiva, the destroyer and transformer. It operates as Vishnu, the preserver, and protector. There are three different representations of the same being and the various forces that hold the universe in balance.

To understand Vishnu tattoos’ significance, it is necessary to internalize the myths and stories surrounding it. The truth is that it was adopting different names and forms as the Hindu religion adopted new spiritual beliefs, with their legends and gods. It comes in all these forms to protect humanity from demons and other evil spirits. While other Hindu deities such as Shiva or Brahma sometimes attend with blessings to various demons and evil spirits, Vishnu always presents to defeat them and destroy them.

These representations can provide aesthetic value for those interested in taking the shape of this god expressed through Vishnu tattoos’ symbolism. It is also advisable to read these various incarnations’ stories if you desire to better understand its meaning. Vishnu is presented in the material plane as the fish Matsya (protecting the realms of water), Kurma, the tortoise (protecting water and soil), and two entities that protect the earthly kingdoms: Varaha, which is a human-faced pig, and Narasimha with a body, head, and claws of a lion). As humans, Vamana, Parasurama, Rama, Balarama (Buddha), Krishna, and Kalki.

The Vishnu tattoo is one of the most important in the Hindu religion. Wearing the Vishnu tattoo is a symbol of goodness and mercy. Vishnu is the guardian of the universe. He is one of the three projections of the Absolute. They are a symbol of the stages of human existence. This would be birth, life, and death. He fits in there as the embodiment of life. People with Vishnu tattoos see themselves as empathetic beings that value life. Vishnu is the savior, rescuer, and preserver. Vishnu is generally represented in the form of a man with four arms and a dark complexion. He is holding the discus, the club, the conch shell, and the lotus with his four hands. This tattoo is recognized as one of the more popular tattoos in Hindu tattooing.

Vishnu is the divine preserver of Hinduism and the supreme being of the Hindu trinity (along with Brahma and Shiva), the protector of the world, humankind, and the dharma (moral order). In a couple of his more famous incarnations or descents to the world (avatars), he was both Rama and Krishna. In tattoo designs, Vishnu is shown often as a beautiful and dark man with four arms, who might hold a conch shell (representing creation and transience), a discus or chakra (the wheel of existence), a club (authority), a lotus (representing creation or purity), or he may display different hand gestures (mudras).

You can always find your own Vishnu tattoo, but there is one thing you can be sure of it’s a powerful tattoo.