Home
Blog
Binary Tattoo: Representation Of A Digital World In The Tattoo Art

Binary refers to a number system that uses only two numbers, which are 0 and 1. The binary code has been especially useful in computer systems. To represent bits, which are very small pieces of information, and they are “on”, or “off” and “go” or “no-go.”

There are binary tattoos that sometimes get overlooked as dull or not as visually stimulating as a scene composed of more animated subjects. However, for some people, that simplicity carries a huge appeal. While they are not exceedingly common, binary tattoos are gaining popularity in the last few years.

A binary symbol tattoo is, therefore, a string of 0s and 1s, which can sometimes be used to encode an infinite number of meanings, even though its most basic meaning may simply be a representation of a digital world. 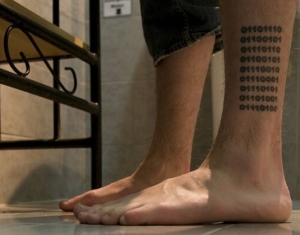 As it is comprised of a series of 0s and 1s, the binary code is quite a complex system that is used in computing and telecommunications.

Tech geeks are usually the ones who most appreciate binary tattoos, because of their potential to hide profound meaning in plain sight while paying homage to their interest or their career.

With that being said, while there is nothing wrong with a string of number code if that is what the wearer truly wants, a tattooist with some imagination can turn that bunch of zeros and ones into something extremely special. By using forcer perspective tricks or arranging the code in asymmetrical patterns, the artist can achieve greater visual interest.

Also, the binary code can be worked into a lot of different shapes. This is ideal as suddenly, the tattoo represents not only the hidden meaning within the code itself, but it also displays an actual image, which also means something to the wearer. In this way, there are both public, as well as private meanings assigned to the same piece, which makes it like two tattoos in one.

If zeros and ones are the primary focus in the tattoo, they can still look stylish if applied with precision and using creative lettering.