Home
Blog
The Book Of The Dead: From Ancient Egyptian Text To The Tattoo Art.

The Book of the Dead is an old Egyptian funerary literature, which is used from the start of the New Kingdom, around 1550 B.C.E., to around 50 B.C.E. The popular title was put by some western scholars. The original Egyptian name for the text, which is translated as Book of Coming Forth by Day. There is also another translation, which would be Book of Emerging Forth into the Light.

The word “book” is the closest term to describe the loose collection of texts, which consists of a lot of magic spells which are intended to assist the journey through the Duat or underworld of a dead person, as well as into the afterlife, and written by a number of priests during about 1000 years. 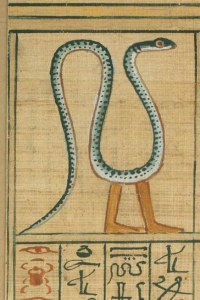 The Book of the Dead was a part of a tradition of funerary texts that includes the earlier Pyramid Texts and Coffin Texts, which were painted onto objects, not papyrus. Some of the spells which were included were drawn from these older works, and they date to the 3rd millennium B.C.E. Some other spells have been composed later in Egyptian history, dating to the Third Intermediate Period.

Hieroglyphs of some short sections from this ancient Egyptian funerary text is used in many Egyptian tattoo designs. They are usually colorfully illustrated, papyrus scroll copies of this work were found in the Egyptian tombs. As we already mentioned, the Book of the Dead is one part of the Egyptian funerary literature, and it consists mostly of magic spells and formulas that are used to protect, as well as help the deceased one in the afterlife. It also contains many of the fundamental beliefs which are incorporated in ancient Egyptian religion.

When people use this particular artwork for a tattoo idea, there is no sense of the morbid. The Book of the Dead is a functioning and utilitarian tool with a focus on life. However, it was also not the central holy book of Egyptian religion.