This verse means that justice is impartial and objective. There is an allusion to the Greek statue of justice, which wears a blindfold so as not to treat friends differently from strangers, or reach people better than those that are poor. This image, even though derived principally from the Greek goddess Themis, is not only of Western origin. The Egyptian goddess Maat also utilized the scales to measure deeds against the weight of a magical feather. 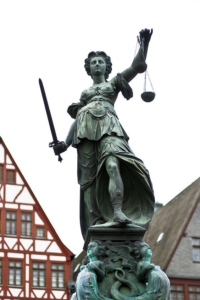 The Greek goddess Themis is described as “the Lady of good counsel” and is the personification of divine order, fairness, law, as well as natural law and custom. Themis is the symbol of wisdom, and the goddess herself acted as an interpreter of the will of the gods. Typically, the statue is shown as a somber woman in a Grecian type of tunic or robe that wears a blindfold in order to ensure impartiality and carries the Scales of Justice and a sword to mete out righteous judgment.

As we already mentioned, her symbols are the Scales of Justice, tools that are used to remain balanced and pragmatic. Themis means “divine law” rather than a human ordinance, literally “that which is put in place.”

The ability of Themis was to foresee the future, and that enabled her to become one of the Oracles of Delphi, which in turn led to her establishment as the goddess of divine justice.

Themis is also the Greek equivalent to the “Justitia,” a symbol, and an image of the moral force in judicial systems. She is also symbolizing the power of reason and justice, though also punishment on either side. Tattoos of Lady Justice are strongly associated with the morality and inner beliefs of a person. No matter if they are done in a traditional style or represented in a more realistic way, tattoos of the Lady are a dramatic sight, and usually, they are incredibly powerful! She is also considered as an iconic image in law and morality all over the world.