It is not a secret that children love cartoons. However, those children tend to grow up to be adults who also love cartoons. Although they would love watching different types of movies, the joy of watching an animated comedy cartoon will never grow old with them. A cartoon is an enormous medium of expression as they can literally express everything. The ability to animate the action definitely creates the freedom to do everything you want. Men of all ages usually find connections with the underlying themes of comedic styling of their favorite characters. They even make great subjects for tattoos since they are already in a drawn format. 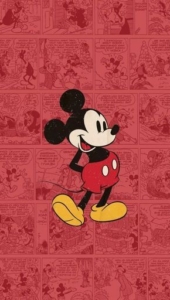 Cartoon characters are a very common motif for beautiful tattoo designs among tattoo lovers. Their popularity grows every day, with the number of cartoons also increasing. Cartoon characters form a considerable part of the world of tattoos, and that is why people sport them more and more.

One such cartoon character, which we all know, is Walt Disney’s Mickey Mouse. Here, we will talk about the history of the cartoon and its use, meaning, and symbolism in tattoos.

Mickey Mouse is a hilarious animal cartoon character. He is the mascot of The Walt Disney Company. Walt Disney and Ub Iwerks created Mickey Mouse at the Walt Disney Studios in 1928. An anthropomorphic mouse that usually wears red shorts, large yellow shoes, and white gloves, Mickey is one of the most recognizable characters in the world.

Mickey Mouse was created as the replacement for a prior Disney character, Oswald the Lucky Rabbit. Mickey appeared for the first time in the short Plane Crazy. He debuted publicly in one short film titled Steamboat Willie, which is one of the first sound cartoons.

After that, he appeared in more than 130 films, including The Band Concert, Brave Little Tailor, and Fantasia. He appeared primarily in some short films, but occasionally in feature-length films too.

Starting in 1930, strip artists extensively featured Mickey as a comic strip character too. The Mickey Mouse comic strip, which Floyd Gottfredson created, ran for 45 years. Mickey even appeared in some comic books like Disney Italy’s Topolino, Wizards of Mickey, etc. He also appeared in other media like video games and merchandising.

Mickey generally appears together with his girlfriend, Minnie Mouse. However, he appears with his pet dog Pluto, his friend Donald Duck and Goofy. His nemesis, Pete, is also here, among others. Although Disney initially characterizes it as a cheeky, lovable rogue, over time, Mickey became a nice guy. He became an honest and bodacious hero.

Few cartoon characters have transcended animated entertainment in the way in which Mickey Mouse has. Probably no other cartoon character has remained as popular and well-known as Mickey Mouse. He has become the symbol of the “happiest place on Earth.” Also, he is the symbol of the hearkening back to childhood and the simplicity of the native joy and optimism that defines his character.

There are a lot of colorful and fun tattoos that Mickey Mouse inspires. For example, you can portray Mickey alone, or with some other characters from the Disney world. In fact, the most common character appearing together with him in tattoos is his partner, Minnie Mouse.

Since his first appearance, Mickey has always been represented in much the same way. His distinguishing feature is his round head with two round ears on top. The silhouette of the ears and head are just as recognizable as Mickey himself. They find their use in the Official Disney Mascot. Mickey even has the ability to boast a star on the Hollywood Walk of Fame. He often wears short white gloves and red clothing.

You may choose to have a Mickey Mouse tattoo simply because you love Disney. You can also choose this famous character because it has a specific meaning attached to it, like:

Usually, couples choose Mickey in combination with Minnie tattoo designs. Often, the man will get a picture of Mickey, and the woman will have Minnie. These tattoos are often placed in the same area of the body of both men and women.

Big Disney designs that incorporate Mickey and Minnie Mouse can look amazing. This is especially true when it comes to full back pieces or arm and leg sleeves. But, most of these tattoos are often small to medium.

Females like Mickey and Minnie Mouse tattoos. This is simply because classic cartoon characters aren’t desirable masculine subjects. However, we don’t want to say that men can’t wear this design too. They are unisex, and that is why they are equally common among both genders.