Home
Tattoo Meanings
Gnome Tattoos: What Are Gnomes And What Their Meaning In Tattoo Art Is

Probably originating in the genii of the Middle East, the legend of the gnomes traveled to Scandinavia. There, it was embellished, and from there, we derive most of our conceptions of gnomes.

Short, and sometimes hunchbacked, living underground, and possessing great treasures, the gnomes are only visible to clairvoyants. They are generally kind, particularly to miners. In various images and depictions from the past, the male wears a red cap, and while the female a green one, until she gets married. 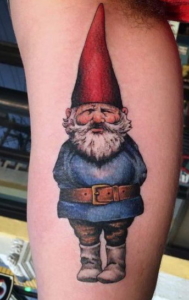 A gnome is a diminutive spirit in Renaissance magic, as well as alchemy. Paracelsus introduced it in the 16th century, and later, more recent authors adopted it. Such authors are the ones of modern fantasy literature. Its characteristics were reinterpreted in order to suit the needs of various storytellers. However, they are typically small humanoids that live underground.

The word gnome originates from Renaissance Latin gnomus, which first appeared in the Ex Libro de Nymphis, Sylvania, Pygmaeis, Salamandris et Gigantibus, that Paracelsus wrote. The publication of the book was in 1566 in Nysa.

The term may also be an original invention of Paracelsus, possibly deriving the term from Latin genomos. He also uses Gnomi as a synonym of Pygmæi and classifies them as earth elementals. He describes them as short, very unhappy to interact with humans. He also said that they have the ability to move through solid earth just like humans move through the air.

The chthonic or earth-dwelling spirit has precedents in various medieval and ancient mythologies. It guards mines and precious underground treasures, notably in the Germanic dwarfs. These creatures are a common motif for interesting tattoo designs. Below, we will talk more about gnome tattoo designs and meanings.

Gnomes are the dwarfish imps of Northern European mythology. Like trolls, they also lived underground. According to Swedish legends, they guarded of mineral treasure. It was not a surprise to find them frequently in mines and quarries. They even prevented miners from entering their mines or so the stories went.

Somewhere around the 1850s, gnomes started appearing in German gardens. This time, were terra-cotta figures. As they were hard workers, Germans believed that it is beneficial to have them in the gardens.

These creatures dwell beneath the earth and guard the underground mineral resources. There are a lot of stories about them related to their magical powers and benevolence.

The gnome tattoo finds its basis on these very myths, but it is usually present in combination with some modern images and motifs. The gnomes in tattoos are a short old man with a long beard and a pointed red hat. They have a really cute and funny appearance resembling that of Santa Claus.

These gnomes are usually carrying a lantern or backpack or riding a turtle. Regardless of the pose, they always look sweet and beautiful and illicit warmth and mirth. The garden gnomes are the symbol of good luck. They can even symbolize protection and fertility. They are the spirits of the earth. In tattoo art, the gnome protects the wearer and his family.

Because of the love of gnome tattoo enthusiasts of the original illustrations of gnomes, they decide to get tattoos in the same style as the animations and illustrations. However, sometimes, tattoo lovers choose to have their gnome tattoo in a different style.

The gnomes still have their red hats and blue jackets, but the artistic style used in their creation is different. Usually, these tattoo designs are present alone, but they can also be in combination with some other items.

Gnomes can be figures of folklore, garden implement, or clever travel marketing too. Regardless of the aspect of the gnome, the cheerful irreverence which follows this legendary little creature won’t be denied. Gnomes embody every aspect of an idyllic life off the grid, enviably free, and not a care in this world. That’s why it is not a surprise that the gnome made its way into different things, including tattoos.

Earthy and colorful, with a mischievous wink that a sincere grin accompanies, this tattoo is a totem for the wearer. They will remind the wearer to take it slow and take absolute joy in his or her life. The gnome tattoo keeps life on the lighter side, and in that way, it is infinitely more agreeable.