When we think of wing tattoos, we usually think of those large, detailed back or color tattoos that are very popular recently. These tattoos can feature wings from angels, birds, butterflies, dragons, or even from messengers of ancient Gods. Usually, wing tattoos are emblems of innocence, divine justice, grace, guidance, sweetness, and spirituality. They are often done in shades of black and grey, filling a large space, and looking realistic. However, they can also be colorful or done like tribal tattoo designs. 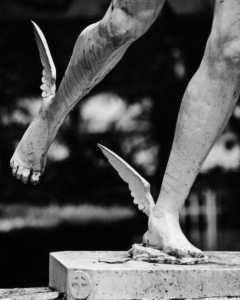 Hermes wings, which are the wings of the messenger of the Greek Gods, are a very common motif for tattoo designs. Below, we are going to talk about Hermes, and what his wings in tattoo art represent.

Hermes is the God of trade, merchants, heraldry, commerce, thieves, sports, travels, and athletes in Ancient Greek mythology and religion. He is the son of Zeus and Pleiad Maia and was the second youngest of the Olympian gods.

Stories and myths describe him as moving freely between the worlds of the mortal and divine. He was the one that conducted souls into the afterlife. Moreover, he was the protector and patron of roads and travelers.

According to some myths, he is a trickster, and he outwits the other gods. He does that just for his satisfaction, or also for the sake of humanity. His symbols and attributes include the herma, the tortoise, the rooster, satchel or pouch, winged cap, and sandals.

His principal symbol is the Greek kerykeion or Latin caduceus, which actually appears in the form of two snakes that wrap around a winged staff with carvings of other gods.

In the Roman adaptation of the pantheon from Greece, Hermes is the Roman God Mercury. This God also developed some similar characteristics, like being the patron of commerce.

Hermes is also the author of skilled or deceptive acts and as a benefactor of mortals. In the Iliad, he is famous for being the bringer of good luck, guardian, and guide and excellent in tricks. He was a perfect ally of the Greek gods against the Trojans. But, he did protect Priam when he went to the Greek camp to retrieve the body of his son Hector. Moreover, he accompanied them back to Troy.

Hermes was the fleet-footed messenger of the gods in ancient Greece. Moreover, he had duties that involved conducting the dead to Hades. He always carried the caduceus and wore winged sandals that permitted him to fly rapidly from one place to another.

The tattoo, which recollects him and his speed, involves small wings. They are often tattooed near the ankle, on the outside of the leg. They are approximately near the place where the wings on his boots would have been.

The mercurial wiles of paying tribute to Hermes, the messenger of gods, are different from those that choose these tattoos. Usually, they indicate a restless soul, the relentless wanderer, or those that want to fly as high as they can.

This Greek God exemplified the powerful weight of freedom. He was both quick in movement and in spirit, two attributes that were dear for those ancient and prestigious cultures.

Famous for the wings on his ankles, he represents the dreams of many to explore, wander, and know this world intimately.

Most of the Hermes tattoos are simple the wings on the ankle. However, it is the form of these wings that impart an individual and specific meaning. More massive wings show the world that the wearer of the tattoo holds freedom in very high esteem.

Indeed, the idea of taking flight spontaneously, and leaving for some unknown parts, is especially appealing to tattoo lovers. Hermes tattoos show that your soul is running wild, in bounds and leaps. This is the untamed tattoo for the people that don’t wish to be tamed.

Generally said, we can add wings, as a design element, to other imagery, such as hearts, nautical tattoos, gun tattoos, daggers, etc. However, Hermes wing tattoos are specific and have a really special placement, and that’s why they are often present alone.

Wing tattoos, in general, may represent mystical aspects, transforming something into a more evolved state, etc. They can represent something that is more spiritual. For instance, Hermes wing tattoos may represent freedom, capacity, or speed.

Hermes is the messenger of gods, and he was the God of eloquence, trading, thievery, and orating. Ankle tattoos may be symbolic of this historical figure, who was the personification of quickness, both mentally and physically.