Home
Blog
Betty Grable, The Number One Pin-Up Girl Of The WWII Era

Elizabeth Ruth Grable, or best known as Betty Grable, (b.18-XII-1916 – d. 2-VII-1973), was an American actress, pinup girl, dancer, as well as singer. During the 1930s and 1940s, her 42 films grossed more than $100 million, and she established a record of 12 consecutive years, being in the top 10 box office stars. In 1946, Betty Grable was listed as the highest-salaried American women by the U.S. Treasury Department. During her career, Betty earned more than $3 million.

Elizabeth Grable was born in St. Louis, Missouri. She had Dutch, English, German, as well as Irish ancestry. Nicknamed Betty, when she was a child, she was pressured by her mother – a stubborn and materialistic woman – to become a performer. She was entered in multiple beauty contests, many of which she won or for which she achieved considerable attention. Despite being successful, she suffered from a fear of crowds and sleepwalking. 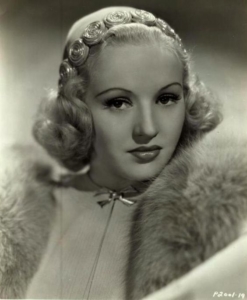 Grable died at the age of 56 from lung cancer in Los Angeles, California. Her iconic pinup image was recently named one of the Time’s 100 Most Influential Photographs of All Time.

She is best remembered for her classic WWII pinup, showing off her “million-dollar-legs.” Hosiery experts claimed that the proportions of her legs were ideal: thighs 18½, calves 12, and ankles 7½. Her famous leggy rearview pose in a swimsuit became an instant sensation and was also one of the most widely distributed pinups ever.

The Grable pose which worked its way into the tattoo flash of Ralph Johnstone is the classic back view: her head turned toward the camera with her hand on her hip. The photograph was taken in 1943, by studio photographer Frank Powolny. The story behind the picture goes that Betty Grable was pregnant at the time when the photo was taken, so the photographer chose this pose and angle, in order to hide that fact. A lot of artists and photographers say that it was this photograph that made Betty the highest-paid female star in Hollywood in the late 1940s.

However, for the GIs who carried the image overseas, she was more than beauty – she was a bit of Americana and reminded them of what they were fighting for back home. Even now, some sixty years later, that photo is the model for tattoo artwork around the world.