Home
Blog
History Of American Traditional Tattoos – Early Beginnings
The history of American traditional tattoo carries a big part of the tattoo art in general. That also knows like the “old school” style. This style’s one of the fundaments of modern tattooing. Tattooing is a form of art, and while the style and meaning vary throughout various cultures, the overall aim of tattoos is generally similar – to show identity.
From the 2000+-year-old Samoan practice of tattooing intricate patterns which had very specific cultural meaning, to Japanese Irezumi tattooing which held decorative, as well as spiritual and societal purpose, body art has held a special place in a lot of different cultures.

But, Western society took longer to get into the world of tattoos. If you were proper gentlemen on the streets of London or Paris in the 1600s, you did not have a tattoo for sure. Finally, by the 1700s, there were people that looked at the world differently – who fled the safety and constrained of civilization for another kind of existence. Those people were the sailors. Tattoos were considered as the province of people that were living outside the constraints of mainstream society – sailors, hobos, and circus freaks. 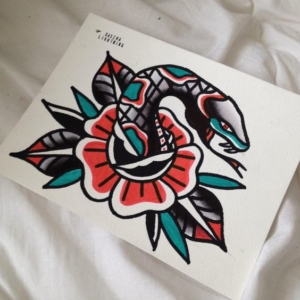 So, as we already mentioned, the history of tattoos has existed in other cultures for hundreds, as well as thousands of years, but the American tattoo tradition is a relatively new one. It started primarily with sailors. After the American Revolution, United States sailors cultivated a culture of tattooing for several reasons. One of them was to ensure that they had to define, as well as distinguishing marks on their bodies. British ships forcibly took American sailors to the British Navy if they could not identify them as Americans. One way to avoid this was by having a specific tattoo which was proof that they were who they claimed to be. Also, sailors received tattoos in their voyages to foreign countries with a rich tattoo culture like Japan and the Pacific Islands. According to some historical records, it was the men on Captain James Cook’s crew who first chose to get tattoos as mementos of their journey to the great tattoo cultures of Japan, China, and the Pacific Islands. That is pretty much how it stayed for the following 200 years or so.