A bindrune is a combination of two, three, or more runes. Runes are ancient alphabets which are used by Germanic peoples in Northern Europe, Britain, Scandinavia, and Iceland, from about 3rd-17th century AC. There are different runic alphabets that are similar but not identical, used at different times, by different peoples too.

Bind runes are extremely rare in Viking Age inscriptions, but they are more common in earlier Proto-Norse and later or medieval inscriptions. On some rune stones, the bind runs may have been ornamental and used to highlight the name of the carver. 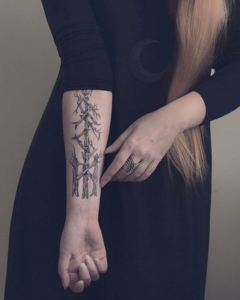 The bind rune is essentially a special, as well as customized combination of individual runes which are written one directly on top of another. Even if the bind rune forms a word, the letters are not arranged from left to right, as it is done in Western languages. Instead, each successive letter is simply placed over the previous one, which ultimately creates one dense and complicated rune as a final product. That single image captures, concentrates, as well as intensifies the meaning of the runes, more so than if the world had simply been written out.

There are two variations of bind runes: normal, which are formed of two or rarely three adjacent runes, joined together to form a single conjoined glyph, usually sharing a common vertical stroke, and same-stave rune, which is common in Scandinavian runic letters, written sequentially along a long common stemline.

As we already said, there is historical precedence to use runes in tattoos. So, if you are of Northern European heritage, there may be a tattooed Nordman or Viking in your genetic past. Runic tattoos are powerful. If they are invoked or created mistakenly, or for the wrong reason, they can be dangerous too. The poor creation of a runic charm may invoke the charm, even if that was not the intention.

Another thing that you may don’t know is that the famous Bluetooth logo also merges the runes similar to the modern Latin alphabet letters h and b; ᚼ or Hagall and ᛒ or Berkanan together, forming a bindrune. The two letters from the initials ‘H B’ allude to the Danish king and Viking raider Harald Bluetooth.