Getting a tattoo is a permanent thing, and while some people prefer only to grab something that catches their eye because it is pretty, scary, or popular, others like to do research and spend some time figuring out precisely what they want, as well as why they want it. If you look for some ideas, as well as inspiration for your new tattoo, here we have a suggestion – tree tattoos or in our case bonsai tree.

As a general rule, trees are usually thought of as long-lasting, as well as resilient. They survive a long time, weathering storms and elements, which make them a sign of strength and adaptability to a lot of different societies. They also offer safety to creatures that live in their branches, travelers, who rest in their shade, as well as anyone that builds their home with lumber. 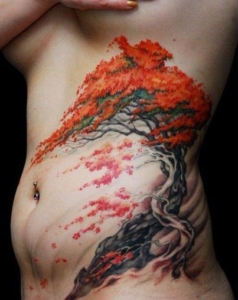 One such tree is the bonsai tree. The bonsai tree, Japanese for “tray planted,” is a symbol of Oriental culture. As these trees are highly prized today, their cultivation started in China more than a thousand years ago. The Japanese people went to great lengths to refine the art of bonsai, and some believe that the most exquisite examples are still being developed in Japan. The bonsai art form uses horticultural techniques together with an artistic application to cultivate miniature replicas of trees as they are found in nature. This tradition was refined over the last millennium to reflect the aesthetic qualities which are found in nature through balance, as well as simplicity and harmony. The symbolism is also employed to describe the relationship between the stylized bonsai and trees, which are found in nature.

The bonsai is typically a living dwarf tree, such as pine, azalea, or maple, which is grown in a container. They are painstakingly trimmed and trained, and they also take years to grow. It is an art form that has gained popularity all around the world, and its appeal is confirmed by the fact that images of bonsai are used in tattoo art. They are natural, as guided by the man, and they are distinctly oriental in their form and presentation.