According to sayings, a single leaf is an ancient heraldic symbol that represents happiness. But, it can represent a lot of other things than happiness. In fact, leaves can represent many different aspects of the life of one person, as they symbolize life. Moreover, they can represent death. 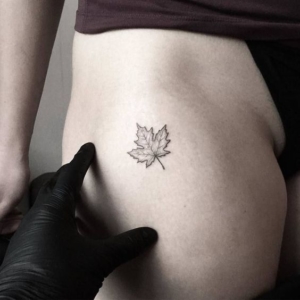 During the spring season, the leavers are born, while during the summer season, they keep growing with shades of green. However, when the autumn comes, they reveal the change in beautiful colors of yellow, orange, red, and burgundy. Eye-catching at first sight, they can change to a brown color. Then, before the winter season comes, they fall to the ground in death.

Leaves commonly represent the cycle of life, because even after his death, life goes on. Even though we die, our lives will go on. We all pass the cycles of life. A lot of women and men feel that these tattoo designs may represent their lives, going through various stages. However, just like it represents death, it can also symbolize rebirth. This is because leaves will once again grow back during the spring season.

Specific leaves may hold their own symbolic meaning. Here, we are going to talk about the meaning and symbolism of the maple leaf tattoos.

This is actually the characteristic leaf belonging to the maple tree. It is the most widely recognized “De Facto” national symbol of Canada.

By the early 1700s, the French Canadians along the St. Lawrence River adopted this motif as an emblem. The popularity of the maple leaf with French Canadians continued on. They reinforced it when, during the inaugural meeting of the Société Saint-Jean-Baptiste in 1834, the leaf was one of the several emblems proposed to represent the society.

The first major of Montreal, named Jacques Viger, also described the maple. He said that it was “the king of our forest and the symbol of the Canadian people.”

After that, the maple leaf slowly continued being the national symbol. During 1868, the Quebec and Ontario included it in their coats of arms. Later, in 1921, Canada added it to its coat of arms. Historically, the golden maple leaf represents Ontario, while the green one represents Quebec. From 1876 until 1901, the leaf was present on all Canadian coins.

In 1965, the maple leaf was finally the central national symbol with the introduction of the Canadian flag. The flag uses a highly stylized eleven-pointed maple leaf, referring to no specific maple species.

The winter’s coming, and summer’s end is a natural part of the symbolism of this floral design in the West.

The maple is a tree or also a shrub with has almost 128 species. Most of the species are native to China and Japan, with some of them appearing in the Americas and Europe.

During the autumn season, the leaves of the maple become brightly reddish, yellow, or purple. Then, they slowly start falling on the ground until the whole tree grows naked. As of this feature, this is the symbol of the passing time. Also, in Japan, it is the symbol of lovers.

The tattoos which use these leaves also convey the approach of winter and the temporary death of green plants. When done in red colors, the maple leaf is the symbol of Canada.

The Japanese maple leaf, together with the cherry blossom, is one of the most popular tattoos with floral motifs. In Japan, tattoos of these leaves are evocative of the autumn, and the change of the seasons. They correspond to a symbolism that has a connection with the passage of time, as well as aging.

The color of the leaf tattoo also represents a symbolic meaning. For instance, a yellow or green maple leaf tattoo will symbolize a new beginning or hope. But, a dark reddish one may express our loss or our sadness.

Another popular version of the maple leaf tattoo is the one that comes from the Canadian flag. Like a tree, the maple represents endurance and strength. So, maybe that is the reason why Canadian Forces use maple leaves on their military rank insignia.

As the maple is a vigorous tree, which can survive massive storms and cold, many people associate their maple leaf tattoos with resistance and strength to the changes in their lives. However, the meaning differs from the region. For example, in Asia, it is a symbol of love. However, it can also have the opposite meaning. For Celtic people, the maple leaf is the symbol of resistance, invincibility, and strength.

In the Slavic and Baltic regions, the maple was usually a sacred tree. So, another symbolism of the maple leaf tattoos could be the profound connection of humans with nature.

Maple leaf tattoos are beautiful images that we can place anywhere on our bodies. It is an excellent tattoo design for both men and women. Those who like small tattoos would find this one perfect for them.