Home
Blog
Bull’s Eye Tattoo: Know The Meaning And Symbolism Behind It

Before you have some plans to get a bull’s eye tattoo, you have to know the meaning behind it. This tattoo became a popular tattoo design because of its profound meaning, as well as its unique characteristics. Bull’s eye itself means the center of an archery target, even though the term is used loosely to a target itself, in the form of concentric circles. 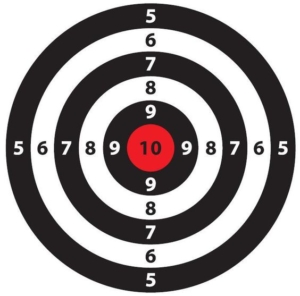 A lot of tattoo lovers choose the bull’s eye tattoo as a symbol of gutsy or daring. In contrast, other people choose it as concentrated thoughts, which often relate to high accuracy, righteousness, as well as perfection. Another meaning of this tattoo is a portrayal of a person that is struggling to reach their aims, as well as ideas in their lives. This also explains the reasons why some people add some slogans to the designs. The Bull’s Eye designs can be represented as archery or shooting rage with different styles. The meaning that it carries is relying on personal choice.

The tattoo also comes in different forms, sizes, colors, as well as designs, depending on personal choices and taste.  Both men and women can wear this tattoo, as the designs usually come in a round shape and simple color. This tattoo motif can be designed in a classic style, which has prominent colors, which are black, red, and white. The red color is usually placed at the center of the bull’s eye. Most people choose several colors to make the design more unique, as well as attractive.

A bull’s eye tattoo holds a bit of irony since the last thing someone would want is to be a shooting target. But, to be “on target” is another matter, and in this sense, the symbol can represent a certain goal. Visual punning was also done with this tattoo, since both components of the name, bull, and eye, can be represented with their symbols.

You should always remember to consider several things before you get this tattoo design. You should choose the perfect bull’s eye design, find the particular and unique colors, and the most important thing; you should have this tattoo done by professional tattoo artists.