Sometimes, the most simple, common, and every day (around us) type of images will provide the most powerful and beautiful meanings. If we look around us or we pay more attention to what happens in the world around us, we are going to see some simple images all over the place, and a lot of these images will hold a lot of different meanings.

For instance, how simple is the heart? One or even two lines complete this image, and yet it holds all the meaning in the world. Love is a powerful thing. Another powerful image is the triangle, which carries a lot of meaning along with the equal sign. These two are just some of the few examples of simple images that hold a lot of meaning. 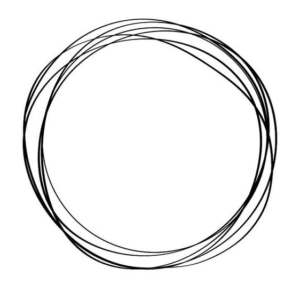 The circle is another symbol that can have a huge meaning. People usually have this image tattooed on their bodies. It is simply the most important and universal geometric symbol. Just like the other fundamental and simple symbols, it has radically different meanings, and it is almost impossible to interpret when it appears in isolation.

Since the early records in history, the circle was a shape that was seen in every sense. Circles appear worldwide. Natural circles include the Sun, Moon, as well as some other planets. The circle was also the premise when building the wheel and led to some other circular objects, such as gears, which helped people to move forward into the process of creating machinery. The circle is one big and significant part of mathematics too. The study of it helped in the development, as well as the creation of calculus, astronomy, and geometry.

Many people believe that there is something perfect about circles. In early astrological times, astronomy and geometry, too, it was believed that there was something wonderful about the circle, and it impacted the way in which people thought about mathematics in general.

With all the images which are simple and powerful, the circle was known to be one of the most popular to be tattooed. From the days of the Neanderthal to the modern man, circles were utilized to represent certain meanings and ideas. One of the most basic, still potent symbols, the circle is a representation of the Universe in its most simple form. It is a primal symbol that portrays the life and the cycle, which leads to death and back to life again. The circle is a representation of the cyclical nature of the Universe and life on Earth.

There are several meanings behind the circle tattoo, and people get it for different reasons. There are also some variations of the circle which are going to mean different things too.

The circle is a symbol that is known by everyone all over the world. Some of the meanings which stay behind the circle tattoo are perfection, totality, and wholeness. Much of this is derived from the fact that a circle comes all the way around and attaches with itself to complete the path.

The circle can also symbolize unity and singularity, or it can mean inclusiveness. It was utilized to represent completeness, but also something without beginning or end. It symbolized wheel, as the basis of the Mandala, in the form rings and bracelets, as a letter in countless alphabets, and as the number zero too.

It was also said that it represents cyclic movements, God, timelessness, the self, and the infinite too. The circle can represent the feminine and masculine. And, regarding the Sun, it has masculinity about it, and when talking about the soul, the circle has a feminine quality.

It just makes sense that there are different meanings for the circle tattoo, which are based on the above explanations. But, the circle can mean anything you want it to mean, and a lot of people are going to add to the image to change or reinforce the symbolism that it already has.

Expanded from the dot, which means both the beginning and the closure of an elemental structure and also a creation point, the circle is both something and nothing too.

Expanding from the dot is the shape of a circle, which represents the cosmos and the spirit. When it is utilized in a lot of magical spells, the circle provides psychic protection to any of those enclosed within it. When you look up to the sky, the circle you see is going to represent the Sun and the Moon, and also the lapse of time. A lot of people relate the circles with the Karmic Wheel of Life.

It is a worldly symbol, a symbol of infinite knowledge and cosmic connections. Someone proud of their intelligence might get a circle tattoo to represent this. Such circle tattoos can range from planets to simple circles. Also, they can use some texts to make the shape of a circle, which can add even more meanings to the tattoo.