Home
Blog
DNA Tattoos; Uniqueness And Individuality: A Tattoo Design For You!

Nowadays, scientific tattoos are a relatively modern and popular design among tattoo lovers. These designs feature anything from microscopic biological structures to macroscopic space objects. A lot of them are readable and small, and they display scientific laws or concepts in the specialized scientific notion. The specific meanings standing behind these tattoo designs are not complicated when it comes to the actual scientific concepts, but the meaning behind the tattoo tends to be highly personal. On the other hand, others opted for scientific tattoos simply to express their passion for a certain subject. One such scientific art design is the DNA tattoo. Below, we are going to explain what is DNA and what different meanings or symbolism this tattoo has.

One science writer, named Carl Zimmer, set out to learn something more about those that had science-related tattoos. He has discovered that a lot of people who work in a scientific field had a related tattoo, which was based on an emotional connection which they had made with a specific scientific idea. 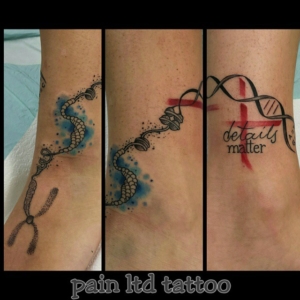 Deoxyribonucleic acid, abbreviated DNA, is the molecule composed of two chains that coil around one another to form a double helix, which carries the genetic instructions used in the growth, development, as well as functioning and reproducing of all known living organisms, and also several viruses. Simply said, this is the genetic code of life.

DNA and ribonucleic acid, or RNA, are nucleic acids; together with lipids, proteins, as well as complex carbohydrates or polysaccharides, nucleic acids are one of the four major types of macromolecules which are essential for all known forms of life.

Both DNA strands are also called polynucleotides because they are composed of simpler monomeric units, which are called nucleotides. Each of the nucleotides is composed of one of four nitrogen-containing nucleobases, the cytosine or C, the guanine or G, the adenine or A, and thymine or T, then a sugar called deoxyribose, and a phosphate group. Then, the nucleotides are joined to one another in a chain by covalent bonds between the sugar and the phosphate, which results in alternating sugar-phosphate backbone.

The complementary nitrogenous bases are divided into two groups, and they are pyrimidines, as well as purines. In DNA, the pyrimidines are thymine and cytosine, which the purines are adenine and guanine.

Both of the strands of double-stranded DNA store the same biological information. This information is then replicated as and when the two strands separate. One large part of DNA, which is more than 98% for humans, is non-coding, which means that these sections will not serve as patterns for protein sequences.

The two strands of the DNA run in opposite directions to one another and are antiparallel. One of the four types of nucleobases is attached to each sugar. It is the sequence of the four nucleobases together with the backbone, which encodes genetic information. RNA strands are created with the use of DNA strands as a template in a process which is called transcription. Under the genetic code, the RNA strands specify the sequence of amino acids within proteins in a process which is called translation.

Researchers utilize DNA as a molecular tool to explore physical laws and theories. The unique material properties of DNA made it an attractive molecule for material scientists, as well as engineers interested in micro and nano-fabrication. Moreover, the interesting molecule is a common inspiration for tattoo designs.

The spiraling double-helix structure, which looks like a tail thin twisting ladder, is symbolic of what makes us biologically human, and it is also something which every one of us shares.

Nowadays, the graphic representation of this molecule is utilized to symbolize the latest in research, particularly concerning unlocking the human genome, and also the science which underlines our common heritage.

There are only a few people in the world that did some genetic research in their profession, but a DNA tattoo can also represent the universal notion of membership in the human species.

The DNA helix can symbolize the uniqueness and individuality of a person. These tattoos are a natural evolution of the artistically sublime expressions of humanity. In order to celebrate science and life in tandem, there is no tattoo that can compete with a DNA tattoo.

Some DNA tattoos are even a discreet tribute to LSD since physicists and biologists were under the influence of the hallucinogenic compounds when they made their ground-breaking observations. Whether you celebrate substances or science, this type of tattoo is going to be perfect for your external vibe at all times.