What is the age that is too young for getting a tattoo? The law in different states holds at 18-years-of-age. Although the ages for piercing vary with permission from parents or guardians, the laws for tattoos are stringent for children. But, people that are under the age of 18 seem to have tattoos on a regular basis, so what is the problem?

With most of the countries and states now allowing anyone that is under the age of 18 to get a tattoo, no matter the circumstance, some of them are wondering if the government sticks its nose where it does not belong.

In recent times, one state set a precedent by charging a mother who tattooed her children. This charge raised a lot of questions, such as whether or not the circumstances surround the tattoo or the tattoo itself make any difference. This is the story about the mother that tattooed her children and was charged with child abuse after that. 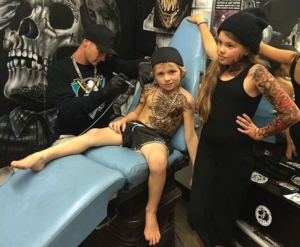 The mother, named Chantilly L. Thomas, was arrested in New York after the police received a tip that she has mistreated her sons. Her sons, aged 12 and 13, had their hands tattooed. The one that was 12 had ‘Ride or Die’ tattooed on the back of his hand, while the one aged 13 had a lightning bolt on this hand.

After receiving the tip on of the New Year’s Eve, the police checked on the two little boys. Once the officers noticed the tattoos, their mother has been charged with “Unlawfully Dealing with a Child.”

There is another similar case to this that happened four years ago when one woman from Georgia has been arrested for bringing her son to get a tattoo on his right arm. But, the mother argued that the tattoo had been a memorial to the brother of the little boy that died in a car accident.

The police hoped that the mother is going to cooperate by handing over the name of the tattoo artist that tattooed her son, but she ultimately opted not to do that.

Furthermore, there was another similar case in the state of Virginia, which ended with the arrest of a 35-year-old woman that has been looking after the 12-year-old child of a friend of hers. This woman brought over a friend that did tattoos in order to ink the 12-year-old kid. She has been charged with malicious wounding of a child, as well as for child abuse too. The man that did the tattooing also received the same charges as her.

Here, we also have a third case of a mother from Ohio that allowed her 10-year-old son to get a tattoo, and after that, she filmed it for a distressing video, which then went viral on social media platforms, and after that, the woman was arrested.

The mother, named Nikki Dickinson, aged 34, has been arrested in Bellefontaine, in the state of Ohio, and taken into custody on charges of child endangering, as well as contributing to the deficiency of a minor.

In the horrifying video which she filmed, and which went viral on social media platforms, her young son was filmed receiving a tattoo from a 16-year-old Kyle Richardson in unsanitary conditions in their home.

The woman was not visible in the video, while her friend Justice Oyer was filmed while she comforted and distracted the young boy, and the boy constantly asked if the artists finished with tattooing. Oyer was not charged for this.

The woman from Ohio told the police that the young boy was pleading with her to get a tattoo, and she gave into him as she was tired of him asking for a tattoo every day.

When it comes to permitting anyone that is under the age of 18 to get tattooed, the laws are quite different from one state to another.

While there are some states which allow small kids to get tattooed with the permission of their parents or legal guardians, some other states such as Georgia, have zero tolerance for anyone that is under the age of 18 getting tattooed.

New Jersey is another state that allows small children to get tattooed with the permission of their parents or their legal guardians, too. At the same time, New York strictly forbids small kids to get tattooed, regardless of the reasons, situations, or circumstances.