Home
Blog
Salvador Dali: Who Was He, And What Is He Best Known For?

The man, the master and the marvel, Salvador Dali, is definitely one of the most celebrated artists, painter, and sculptor of all time. The fiercely technical, still highly unusual paintings, visionary explorations in film, sculptures, and life-size interactive art ushered in a new generation of imaginative expression. 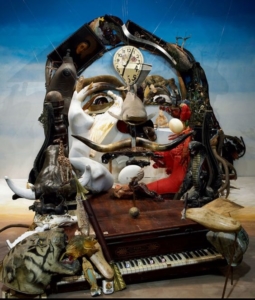 From his personal life to his professional endeavors, Dali always took risks. He also proved how rich the world could be when we dare to embrace pure and boundless creativity. Read below and discover the life and legend of Salvador Dali, and get to know this Spanish son better.

Dali was a skilled draftsman, and he was famous for the striking, and also bizarre images in his work. The painterly skills that he had are usually attributed to the influence of Renaissance masters. The most famous work of Dali is The Persistence of Memory. He completed it in August 1931, and it is one of the most recognizable Surrealist paintings. The expansive artistic repertoire of Dali included film, photography, and sculpture. He often collaborated with different artists in different media too.

Dali was a highly imaginative individual. He enjoyed indulging in grandiose and unusual behavior. To the dismay of those that held his work in high regard, his eccentric manner and his attention-grabbing actions drew more attention than his artwork.

Salvador Dali was born on the 11th of May, 1904, on the first floor of Carrer Monturoil, 20. He was born in the town of Figueres, in the Emporda region, close to the French border in Catalonia, Spain.

The older brother of Dali, who also had the name Salvador, died of gastroenteritis nine months earlier, on the 1st of August, 1903. His father, named Salvador Rafael Aniceto Dali Cusi, was a middle-class lawyer and notary. He was also an anti-clerical atheist and Catalan federalist. He had a strict disciplinary approach tempered by his wife, named Felipa Domenech Ferres. She was the person that encouraged the artistic endeavors of her son.

In the summer of 1912, the family moved to the top floor of Carrer Monturoil 24. As a child, his parents took Dali to the grave of his brother, telling him that he was his reincarnation.  Later, Dali started believing in this concept of reincarnation. Images of his long-dead brother were continuously reappearing embodied in his later works. This includes the “Portrait of My Dead Brother.”

Dali had a sister Anna Maria, who was three years younger. In 1949, she published a book about him, titled “Dali as Seen by His Sister.” His childhood friends were future F.C. Barcelona footballers Sagibarba and Josep Samitier. During the holidays, they were playing football together.

Dali attended drawing school. On a summer vacation trip, 1916, he discovered modern painting. The following year, the father of Dali organized an exhibition of his charcoal drawings in their family home. The first public exhibition he had was at the Municipal Theatre in Figueres in 1918. This is a place he returned to decades later. His mother died of cancer of the uterus in 1921, and at that time, he was aged 16.

Salvador Dali was a Spanish Surrealist painter and printmaker. He is famous for exploring subconscious imagery. Arguably, the most famous painting that he created is The Persistence of Memory, created in 1931. In it, he depicts limp melting watches. Dali collaborated with a lot of popular world figures.

In order to bring up images from his subconscious mind, he started inducing hallucinatory states in himself. Once he hit on the method, his painting style matured with high speed. From 1929 to 1937, he managed to produce the paintings that made him the most famous Surrealist in the world. Also, in August 1929, he met his lifelong and primary muse and future wife, Gala, born Elena Ivanovna Diakonova. She was a Russian immigrant.

In 1940, as the Second World War tore through Europe, Dali and Gala retreated to the United States. Here, they lived for eight years. However, in 1948, they moved back into their house in Port Lligat, on the coast near Cadaques. For the following three decades, he spent most of his time there painting. He was also spending winters with his wife in New York and Paris. The next years of his life were full of accomplishments and great achievements.

On the morning of 23rd of January, 1989, Dali died of heart failure at the age of 84. At that time, his favorite record of Tristan and Isolde played. He is buried in the crypt below the stage of his Theatre and Museum in Figueres.

The past decade saw a lot of changes