Have you ever heard about Wassily Kandinsky? He is a Russian-born artist, one of the first creators of pure abstraction in modern painting.

He was born as Vasily Vasilyevich Kandinsky (Russian) on the 4th of December, 1866, and died on the 13th of December, 1944. After the successful avant-garde exhibitions, he founded the influential Munich group Der Blaue Reiter and started entirely abstract painting. The forms of Wassily evolved from organic and fluid to geometric and pictographic. 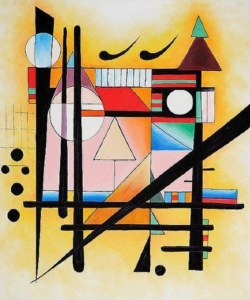 The mother of Kandinsky was a Muscovite, and one of his great-grandmothers was a Mongolian princess. His father was a native of Kyakhta, which is a Siberian town near the Chinese border. When he was a boy, he grew up with a cultural heritage that has been partly European and partly Asian.

The family of Kandinsky was genteel, well-to-do, and fond of travel too. When he was still a kid, he became familiar with Rome, Venice, Florence, the Crimean Peninsula, and the Caucasus.

At Odessa, where his parents settled in 1871, he completed his secondary school. He became an amateur performer on the cello and the piano. Moreover, he became an amateur painter, and he later recalled an adolescent conviction that each color had a mysterious life of its own.

However, his parents saw him in the future as a lawyer. During the year of 1886, he started to study law in Moscow. He entered the Law Faculty of Moscow University. Graduating with honors, six years later, he married his cousin named Anna Chimyakina. During 1893, he became the Docent of Law Faculty and continued teaching.

In 1896, the famous Dept University in Tartu appointed him Professor to the Department of Law. At that time, he was thirty years old. However, at this particular time, Kandinsky decided to give up a successful career. He decided to devote himself to painting. Later on, he recollected two events, which affected the decision he made. The events were visiting an exhibition of the French impressionists in Moscow in 1895 and an emotional shock that he experienced from K. Monet’s “Haystacks.”

During that period, he said:

“That it was a haystack, the catalog informed me. I could not recognize it. This non-recognition was painful to me. I considered that the painter had no right to paint indistinctly. I dully felt that the object of the painting was missing. And I noticed with surprise and confusion that the picture not only gripped me but impressed itself ineradicably on my memory. The painting took on a fairy-tale power and splendor.”

The Lohengrin of Richard Wagner influenced Wassily Kandinsky in a similar way during this period. He felt that it pushed the limits of music and melody beyond standard lyricism. Moreover, Madame Blavatsky, the best-known exponent of theosophy, also influenced him spiritually.

The theosophical theory postulates that creation is a geometrical progression, starting with a single point. A descending series of circles, squares, and triangles expresses the creative aspect of the form. The book of Kandinsky, titled Concerning the Spiritual in Art and Point and Line to Plane, echoes this theosophical tenet. Some illustrations by John Varley in Thought-Forms influenced Kandinsky visually too.

In Munich, one prestigious private painting school accepted him. So, he moved on to the Munich Academy of Arts. However, much of the study he had was self-directed. He started with conventional art forms and themes. However, all the while, he was forming theories that were derived from devoted spiritual studies.

Also, these theories appeared as a result of the intense relationship between music and color. The theories coalesced through the first decade of the 20th century. This led him toward his ultimate status as the father of abstract art.

However, during the Second World War, Kandinsky had to return to Russia. Here, the constructivist movement, based on hard lines, dots, and geometry, influenced his artistic eye. While in Russia, the 50-year-old Kandinsky met the decades-younger Nina Andreevskaya. She was the daughter of one general in the Russian army. They married and had a son together. However, the boy lived for only three years, and the subject of children became taboo. After the revolution, the couple stayed in Russia. Kandinsky applied his restless and comprehensive energies to the administration of government-run and educational programs. In this way, he helped to create the Institute of Artistic Culture and Museum of Pictorial Culture of Moscow.

He returned to Germany after clashing theoretically with other artists. He was a teacher at the so-called Bauhaus school in Berlin, and he wrote poems and plays.

Kandinsky suffered from cerebrovascular disease, and he died in Neuilly-sur-Seine, France, on the 13th of December, 1944. He and Nina decided to move to the suburb of Paris in the late 1930s. The Parisian artistic environment was reserved for the presence of Kandinsky. One reason for that was the isolation he had from foreign colleagues. Another reason was the absence of recognition of abstract painting in general.

Wassily Kandinsky earned a lot of prominent supporters like Solomon Guggenheim, and he was exhibiting until he died.