Home
Blog
Sandro Botticelli’s “The Birth of Venus,” a Subject in Tattoo Art: What it Represents?

As a tattoo is fundamentally art, it should not be a surprise that a lot of works of fine art through the ages have inspired tattoo artists and clientele alike. The Birth of Venus, by the Italian artist Sandro Botticelli (1445-1510), probably made in the 1480s, is maybe the most recognizable of these great works. Not a depiction of a myth, The Birth of Venus portrays the birth of love in the world. It represents the goddess Venus at the sea-shore after her birth when she had come from the sea fully-grown woman.

Standing on a giant clamshell from which she had emerged, Venus attempts to cover herself, partially using her long golden hair. On her left, the wind god Zephyr blows gently caressing her hair with a shower of roses, and on her right, a handmaid waits for the goddess to go closer to dress her shy body. The meadow is sprinkled with violets, a symbol of modesty but often used for love potions.

However, her nude form is considered one of the most sensuously beautiful figures of the Renaissance. The Birth of Venus is undoubtedly one of the most famous and appreciated works of art in the world, which has also found a home on the skin. Indeed, it is amazing that artwork that was originally almost life-size can be reduced to work for a tattoo. 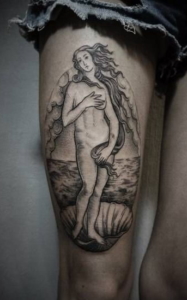 When people use fine art for a tattoo, the actual symbolism which it carries can variate from art appreciation to the notion of birth of love in the world in this case or to the attraction of something which is sublimely appealing. Certainly, the masterpiece of Sandro Botticelli, the Birth of Venus, is all of these.

The subject is not 100% the birth of Venus, a title only given the painting in the 19th century, but the next scene in her story, where she arrives on land, blown by the wind. That land probably represents either Cythera or Cyprus, both Mediterranean islands regarded by the Greeks as territories of Venus.

Nowadays, it is also used in logos for everything from entertainment to software companies, but that’s a completely different subject to be discussed on.