One of the most recognized flowers in the world is rose. The rose is also one of the most celebrated and enduring symbols in Western culture. This is similar to the prominence of the lotus flower as a symbol in Eastern cultures. For a long time, the rose is a favorite subject for artists and poets. In the last several centuries, it also became a popular tattoo symbol and design. 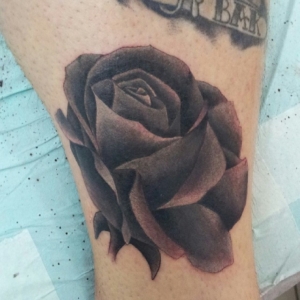 Roses are a complex flower and a popular tattoo design too. Obvious symbolism is love and delicate beauty. However, there is a wealth of culture behind rose symbolism, which may be based on different elements. This includes the color and whether or not the rose is open.

A rose is a flowering plant of the genus Rosa. This genus belongs to the family Rosaceae or the flower it bears. There are more than three hundred species and thousands of cultivars.

They form a group of plants that may be erect shrubs, trailing, or climbing, with stems that are usually armed with sharp prickles. Flowers vary in size and shape and are often large and showy. Their colors range from white through reds and yellows.

Most of the species are native to Asia, with smaller numbers native to North America, Europe, and northwestern Africa. Species, hybrids, and cultivars are all widely grown for their fragrant and their beauty as well.

Roses acquired cultural importance in a lot of societies. Rose plants may range in size from compact and miniature roses to climbers who may reach seven meters in height. Different species hybridize easily. This was used in the development of a wide range of garden roses.

The name Rose comes from French, itself from Latin rosa, which these people probably borrowed from Oscan, from Greek, itself borrowed from Old Persian, etc.

The leaves of the rose are borne alternately on the stem. In most of the species, they are five to fifteen centimeters long, pinnate, with five to nine leaflets and basal stipules. The leaflets often have a serrated margin and usually several small prickles on the underside of the stem. Most of the roses are deciduous. However, several are evergreen or almost evergreen too.

The flowers of most of the species have five petals. However, Rosa sericea is an exception from this, as it often has four petals. Each petal divides into two distinct lobes and is usually pink or white. However, in several species, it can also be red or yellow. Beneath the petals, there are five sepals, which we can see when we look from above. They appear as green points alternating with the rounded petals.

With its deep red color, people historically associated it with blood and hence Christ in Christian iconography. Roses also found their uses in heraldry, alchemy, freemasonry, and festivals of ancient Greece and Rome.

In modern iconography, roses are part of love symbolism and are also synonymous with that which is beautiful. In tattoo art, roses are definitely the most frequently appearing flowers, sometimes complete with thorns and stems. Just like in other symbolism, their meanings in tattoo vary widely with each use. Most of these users find their basis on the beauty and romantic symbolism that they are very famous for.

Even though the rose has a long history of representing love, its image carries many other different meanings. These meanings can change depending on the color, design, and location of the tattoo.

The most common meanings related to the rose tattoo are:

Here, we will also present the meaning of each rose color:

Rose tattoos are versatile, and you can place them wherever you want them. You can consult with your tattoo artist regarding the placement, healing process, and care, right before you book an appointment.