Home
Blog
Tattoo Art And The Potential Risks Of The Practice: Part 2 (The Ink)

Like I’ve said before, one of the most important parts and one of the most significant potential risks of the practice in the tattoo culture is, of course, the ink. The tattoo ink is made of two parts. First is the pigment, and the second is the carrier. The leading role of the carrier is to keep the pigment evenly fluid to prevent the pathogens from growing and to help with the application of the ink into the skin.

We can divide the carrier into two groups. First is ‘’less’’ risky, and the second is toxic. Now I want to make myself clear with the usage of the word “less” because no matter how some materials or liquids are clean and organic, there’s a small percentage of people who can develop some kind of reaction to it. It’s the same thing with tattoo ink, food, or drinks that we consume on a daily bases.

Tattoo inks also have several chemical solutions like fillers, binding agents, and a variety of preservatives with a primary role in preventing the growth of bacteria and microorganisms.

The pigment is a lot more chemically “colorful,” and it’s made from a lot more parts than the carrier. Different tones of color have a different base. 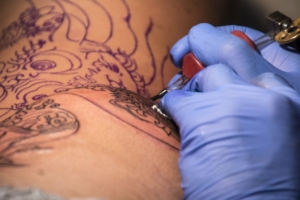 The black color is based on iron oxides, and the non-toxic version is made of carbon and logwood. Whites are made of titanium dioxide. Browns are a mix of iron oxides with clay. Oranges are formed from disazodiarylide and cadmium seleno-sulfide—Yellow’s based on Curcuma or turmeric. For greens, the main ingredient is a carbon-based pigment called monoazo and for the blues copper carbonate and calcium copper silicate. Copper salts are the best and safest for making the greens and blues. These salts are also used in the making of contact lenses and baby toys and furniture. For the violets, it’s a typical usage of various aluminum salts, but carbazole and dioxazine are proven to be the safest and most stable.

In the end, we cannot forget the most problematic color of them all: the Red one. The most allergic and problematic color of them all. Its made of cinnabar (made of mercury sulfide) and cadmium red, which is highly toxic and allergenic. Naphthol reds (synthesized from naphtha) are lesser than two evils because there are still reports of reactions, and that’s why we can say that red color still carries some amount of risks.

Other elements that tattoo ink manufacturers are using in the making of their products are selenium, arsenic, calcium, lithium, and Sulphur. We also have Fluorescent inks that have the ability to retain light and glow under a “black” light. The main ingredients are fluorescent dye and polymethylmethacrylate, and this ink toxic and strongly debatable in the tattoo industry.

Non-toxic and vegan tattoo inks are the new shining star on the tattoo sky, and they are supposed to hold the future of the safe tattooing in the near and distant future