Home
Blog
Tattoos: Does Ink Travel Through Your Body?

Getting a tattoo will sometimes take a brave soul. People may spend time considering what tattoo they should get on their skin; a few of them consider what will happen to the ink once it is under their skin.

The question in this article is: What happens when tattoo ink is injected into your skin? A lot of things remain firmly lodged there. However, some pigments travel to lymph nodes or even destinations in your body, which are farther afield. All the while, you will be left sporting a new tattoo. 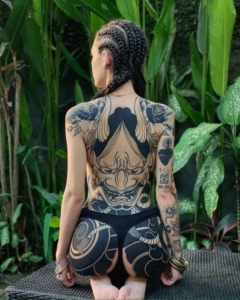 This question is something that scientists are still investigating. To make a tattoo permanent, tattoo artists puncture the skin with hundreds of needle pricks. Each of the pricks delivers a deposit of ink into the dermis, the skin’s layer that lies below the epidermis. This layer is full of nerves and vessels.

When the ink gets inserted into the dermis, it does not all stay put, according to research. Some ink particles will migrate through our lymphatic system and the bloodstream. In this way, it will come to the lymph nodes. Research on mice suggests that some particles of ink may even end up in the liver.

According to Ines Schriever, who is a chemist with the German Federal Institute for Risk Assessment in Berlin, when we inject particles into the skin, some of them travel to the lymph nodes within several minutes.

Most of the tattoo pigments will stay put after a person gets a tattoo. The ink which isn’t cleared away by special repair cells will remain in the dermis. This will happen within the trapped macrophages or skin cells, which science calls fibroblasts. Then, it will show through the skin.

Dr. Arisa Ortiz, who is a dermatologist and director of laser and cosmetic dermatology at the U.C. San Diego Health, said:

“Normally, the ink doesn’t migrate too far from where it’s injected. For the most part, it is engulfed (by skin or immune cells) and then kind of sticks around in the dermis.”

However, researchers are now taking an even closer look at the tattoo ink, which travels to other body parts. Moreover, they are considering the ink that goes particularly to the lymph nodes.

Carbon black is the most common ingredient in tattoo inks. It appears to break down rapidly into nano-particles and end up in the lymph nodes, according to one study. Titanium dioxide or TiO2 is another common ingredient in white pigment. Artists often combine it with other colors to create specific shades.

This kind of ink doesn’t appear to break down into particles as small as the ones present in carbon black. However, some larger particles of TiO2 were still present in the lymph nodes.

Disturbingly, it was also discovered that some potentially toxic heavy metals that originate in tattoo ink made their way to the lymph nodes. The scientists detected particles of nickel, chromium, and cobalt. Artists sometimes add these to organic tattoo pigment as preservatives. They were also present at the lymph nodes.

According to other researches, tattoo pigment may land elsewhere in the body. It is still not known if it is harmful to tattoo pigment particles accumulating in the lymph nodes.

The ingredients present in tattoo ink remain mostly unknown and under-regulated too. One study from 2011 discovered that 10% of unopened tattoo ink bottles tested were contaminated with bacteria.

A lot of scientists and researchers hope to start raising the curtain on tattoo ink ingredients. Their next plans are to investigate inks connected with tattoo-related skin reactions and infections. They will do so by analyzing the skin biopsies of human patients.

The U.S. Food and Drug Administration or FDA oversees tattoo ink manufacturing in the U.S. However; it does so as a cosmetic. According to the FDA:

“Because of other competing public health priorities and a previous lack of evidence of safety problems specifically associated with these pigments, FDA traditionally has not exercised regulatory authority for color additives on the pigments used in tattoo inks.”

From elaborate designs and sports team badges to the names of loved ones, tattoos come in all sizes and shapes. Their popularity increased during the past 20 years. About 29% of the United States population reported having at least one tattoo.

Many people consider tattoos as something beautiful and attractive. However, just a few of them consider the inks used in those tattoos. Many of those inks are not developed for use in human beings. That is why you have to research a lot before you decide to put the ink on your skin.