Home
Blog
The Legend Of The Birdman, The Ambassador Of Makemake

Tattoo motifs varied according to the position of the person in the society, but could also be of a more personal nature, such as one particular design, which we will mention here. This is a design that is inspired by the legend of Birdman, the ambassador of Makemake, the god of strength and fertility.

According to oral tradition, tattooing in Rapa Nui or now better known as Eastern Island – a Chilean island in the southeastern Pacific Ocean, at the southeasternmost point of the Polynesian Triangle in Oceania – is ancient and originated with two female spirits and their sons. Tattooing there has been first observed and recorded for the West by Captain James Cook in 1774, and it was similar to some practices observed in some other parts of Polynesia. 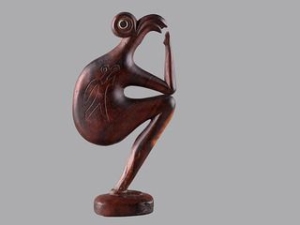 Makemake in oceanic mythology is the creator of man and the earth, who is also the god of strength and fertility. He was a subject to a lot of the arts of people, carving him out of rocks and making elaborate petroglyphs of him holding up staff and sitting cross-legged, his beak being long and wide with the rest of his very human-like. Tangata Manu comes down from the heavens to be an ambassador of Makemake. He enjoys having fun with the humans, and he does an annual race to the top of the cliff Orongo. This race is also called the Easter Island Egg Hunt since its sole purpose is to find the first egg present on the cliff.

This race can be very dangerous, and some of the people of the island have died to fall off of it while scrambling up and searching for the eggs. To the people of Easter Island, the person who accomplished this race and searches and finds would be crowned the Birdman of the year, a blessing from both Tangata Manu and Makemake. This individual would be shined with affection for that whole year.

The legend of the Birdman is an interesting tattoo motif which is quite used by tattoo lovers.