Birds are a symbol of a lot of human values, and we have even based groundbreaking inventions, such as the airplane, on their body structure. Human beings have always had some special connection with these beautiful flying creatures.

Throughout history, humanity was obsessed with birds. They represent a variety of human traits that we aspire to achieve, as well as incorporate into our daily lives. Even though the characteristics embodied by each species of avian is vastly different, all birds speak to the most coveted trait – the desire to be free. 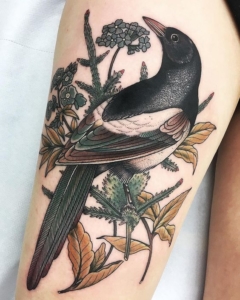 In mythology, symbolism, and tattoo, birds traditionally have mostly positive associations. The flight of birds leads them, naturally, to serve as symbols of the link between heaven and earth, as well as to symbolize spiritual and emotional states. But, each bird, no matter if it is real or mythological, carries its own very specific symbolism. For instance, the dove is a symbol of love and peace, the stork is a symbol of newborns, and the crane is a symbol of long life, among others.

Every bird tattoo goes with different symbolism. Even those birds that are closely related can, in a spiritual, as well as philosophical context, be opposite as the night and the day. Some of the more popular traits which are associated with birds include the following:

Bird tattoo can also come in different colors, and the number of elements that you can choose to add to the design you want is limited only by the depth of your imagination. Some birds have special meaning, like the ones which we mentioned, and others make for a lively tattoo design, and still, there are those images that can be amazing.

No matter if your bird design is mythical or real, bird tattoos have a longstanding history as powerful symbols. The connection may be religious, cultural, as well as personal, but no matter which it is, any type of bird can make a striking tattoo design.