The foundation of the Zig-zag man and how this immediately identifiable man with the beard, hat, and rolled cigarette became famous worldwide is best described in the legend about him. Zig-Zag logo is widespread and is considered as a synonym for the DIY rolling culture no matter whether we talk about marijuana or tobacco. Many celebrities have mentioned these French cigarette papers that go all the way back in the 19th century when they were first introduced, among them Snoop and Cypress Hill, Eazy-E, and even Eminem. For instance, the little orange packages also cover a wall at Willie Nelson’s ranch in Central Texas.

Those who disagree with the arguments against using rolling papers could probably better explain how the brand differs from its competitors. Still, Zig-Zag’s longevity in the game is about more than quality, but it’s also about brand recognition. One of the keys to building a company that stands the test of time is good branding, which includes a memorable name and logo. This guy’s face is seen countless times at a local bodega or smoke shop, but who is he, and where the hell did he come from?

The founders of the Zig-Zag, Maurice, and Jacques Braunstein invented and patented a packaging process for interleaving papers so they would dispense automatically from a booklet. The Braunstein Brothers decided to name it “zig-zag” as a reference to the Z shape of the layered papers. This polished, bearded man that for more than a century has embellished the outside of their booklets, and the reason for that is the logo that does more to connect with the company’s French heredity and to the history of rolling and smoking tobacco. 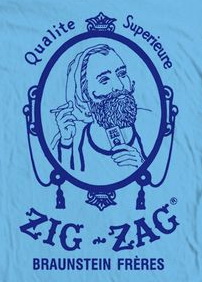 History of the Zig-zag man:

Below, we are going to discuss the reduced version of the origin of this logo, which is included in the AP World History that is learned in high school. Between 1853 and 1856, armed forces from France, the Ottoman Empire, Sardinia, and the British Empire fought against the Russian Empire in the war known as the Crimean War. According to a legend of this logo, during a year-long operation accredited as the Siege of Sevastopol, a light-infantry soldier in the French army who was known as a Zouave got in the way of a speeding bullet and lived to tell the tale. Unfortunately, his clay pipe was not so lucky and was rendered useless. Stuck in the middle of a war, the unnamed Zouave couldn’t just leave to get a new pipe, so he put on his thinking cap and got inventive. The soldier reached for a gunpowder bag, ripped off a piece of paper, wrapped his tobacco inside, and lit up. This makeshift vessel for smoking somehow caught on, and nothing was the same.

The Braunstein’s began using the image of “Le Zouave” on packages as a tribute and have kept him around for over 130 years. Very similar as with most brands, Zig-Zag modernized the look of the logo several times, but the essential elements remained the same, and that is a man with a beard, wearing a hat, with a rolled cigarette either in his hand or in his mouth.

The unclarity of the graphic of the cigarette is the reason why some of the consumers have difficulty in deciding what the man is smoking based on their smoking preference. Now that cigar wraps and vaporizers are a part of Zig-Zag’s record, even more, people can relate to and embrace the icon.

The cigarette papers consist of wood pulp and flax, with the use of natural Arabic gum. They appear in five sizes. The original size or the single wide is often acknowledged as “the white pack” due to its color. The other format is the size 78, often called “the orange pack” (or “oranges” in some areas) for the reason of its color. The third size is known as the kings, or king-size, also well-known for their orange or reddish hue. The fourth one is 1½, and the last one is the double-wide.

Generally, the white pack and orange pack are sold collectively in many stores across the United States. In Canada, for instance, the most popular size is the single wide, but with “cut-corners”. In Australia, on the other side, the most popular size is King size. There are also varieties within these sizes, together with Liquorices, Water Resistant, Slow Burning, and Free Burning.

Thank to the popularity of this logo nowadays, people even get a tattoo of this famous man.