Generally, tattoos became mainstream. Despite that, there are some negative connotations tattoos are nowadays widely accepted forms of art and self-expression. With the number of tattoo lovers which increases every day, it is getting increasingly difficult to find a unique tattoo design.  That means a tattoo that is going to be specific for you and which will carry an interesting and unique meaning for you. For example, cigarette or cigar tattoos are one of the most strange, which fluctuated in the same way as their popularity has over time.

If you are a person that is a lover of some old school tattoos, you know what you can expect: swallows, skulls, beautiful roses, as well as ships. However, in the last several years, there have appeared some new ones. They won the hearts of a lot of artists, as well as tattoo lovers. Some of the most notable tattoo designs nowadays are watercolor or botanical. Also, there are geometrical tattoos, and most notably, quotes. 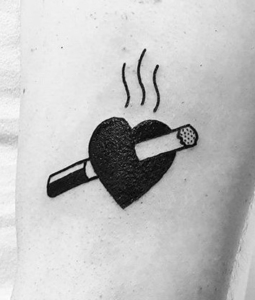 Depending on the type of cigarette, all those ingredients in it are going to vary somewhat.

The commercially produced cigarettes, which are manufactured by one of the Big Tobacco companies, can contain a lot of additives on top of the tobacco, which are in cigarettes. Some of the additives are utilized as flavoring agents. But others, such as ammonia, are added to boost the effect which nicotine has on the smoker. Additives are also utilized to do things such as keep the tobacco moist, as well as extend shelf life.

Cigarettes do not only affect smokers, but those around them that do not smoke, they affect our environment. The cigarette filters are made up of thousands of polymer chains of cellulose acetate. Once discarded into the environment, the filters can create a large waste problem.

Discarded cigarette filters will often end up in the water system through drainage ditches. Sometimes they’re transported by rivers and some other waterways to the ocean.

The cigarette or cigar is a cylindrical roll of shredded or ground tobacco, which is wrapped in paper. Sometimes it is some other substance that does not contain tobacco. A lot of manufactured cigarettes also have filters on one end. They’re intended to trap some of the toxic chemicals in cigarette smoke.

The Mayan Indians were probably the first people to smoke tobacco in the Americas. Some images of tobacco were found carved into the stone, which dates from 600 to 900 A.D. Some of the North American Indians were smoking pipes filled with tobacco as part of some religious ceremonies. Also, they smoked it as well as medical purposes for a long time. Smoking was not an everyday activity, but instead, it was filled with some special meaning.

Cigarette smoking also became a famous activity with men in the early 1900’s. It was not until the First World War, as well as the Second World War, that it took off. Cigarette companies also gave soldiers some free cigarettes and marketed them to women back home too. By the year 1944, cigarette manufacturing was a 300 billion dollar industry. During this period, servicemen consumed almost 75% of the cigarettes which were produced.

However, by the year 1964, concerns over the health effects of smoking were coming to the surface. Nowadays, smoking cigarettes is one of the wanes in a lot of parts of the world. Different cultures still smoke with few, if any, legislative restrictions on them.

It is also likely that cigarette consumption is going to continue to decrease. A lot of people understand the tremendous health hazards which they pose.

Some bad habits may sometimes be tough to fight, but what about having an inked reminder of ours?

Although cigarettes are very bad for us and overall health, they can still give a bit of an edge to our look. So, if you are a smoker and if you are looking forward to quitting smoking or you simply want to look a bit cooler, you should get a cigarette tattoo instead of smoking.

The symbolism of the cigarette, as well as the cigar, has fluctuated the same way in which their popularity over time. Originally, these two were a symbol of daring, as well as forbidden behavior, bad habit. And something of which survives in tattoo art, with a pack of cigarettes which are accompanying other favorite vices and designs.

As the health consequences that cigarettes have were documented, and smoking was actively discouraged by the United States Surgeon General. They became more a symbol of unwanted and harmful addiction. The U.S. Surgeon General has published a report about the dangers of smoking. Not long after that, Congress passed the Cigarette Labeling and Advertising Act. It stated that every single cigarette pack needs to have a warning label on its side, stating ‘Cigarettes may be hazardous to your health.’

Also, while their similarity to some other phallic symbols is obvious, it was Sigmund Freud who said the following:

‘Sometimes a cigar is simply a cigar.’