Home
Blog
What Should You Consider Before You Decide To Get A Eyeball Tattoo?

Sometimes, white eyeballs are not jazzy enough. It is still not clear why. If you want your eyeball to be lime green instead, that is your business. Even the one who invented the scleral tattoo, which is a tattoo right on your dang eyeball, now says that he wishes it were illegal and that he thought people would take the entire thing a lot more seriously.

However, it is still your body, and you can do everything you want to, and you can even get your eyeballs dyed if you want to. But, before doing that, you will have to take some precautions if you don’t want to lose your ability to see. 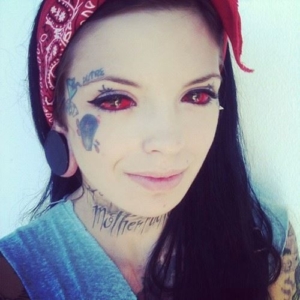 Before, eyeball tattoos caused permanent damage, but the recent plight of a model that wanted to dye her eyes purple, and ended up with massively swollen eyeballs – yes, the eyeballs, and not simply the skin that is around the eyes – has put the procedure in plenty of headlines these days.

The trick is to get the needle inside a barely millimeter-wide gap between two layers of the eye. This is what actually happens inside a human eyeball:

The ink has to get between the conjunctiva and the sclera, which are labeled one and two respectively above. The sclera is the actual white bit, and the conjunctiva is a thin and clear layer directly atop.

In the body art community, there is just one simple method of tattooing: injected small volumes of dye into space between the two layers, and permitting that ink to spread in the patches. It just requires several needle pricks, not like a traditional tattoo, where the tip has to pierce the skin repeatedly.

Technically, it is going to be quite possible to do that to an eyeball, but you would mostly end up with a lot of holes for the dye to leak out.

The artist who first performed the injection method, named Luna Cobra, has himself said that it is not quite a safe thing to do. Eyes can be easily damaged and infected, and it is usually quite difficult or impossible to reverse the effects of such a procedure.

Unlike skin tattoos, those of the sclera are injected in an almost surgical way. If the hand of the artist slips and the needle goes too far, or the ink is too thick, or even if the amount of the dye is too much, a person will end up with everlasting damage almost in the same instance. A lot of people with experience getting tattoos are going to tell you that you have to choose an artist carefully for anything you would put into your skin and which will be everlasting. A person should choose wisely when he or she is asking someone to stick a needle in their eyeball.

On the other hand, tattoo artists have not been trained to poke people’s eyeballs with some needles; there is no certification for corneal tattooing. All a person can go on is their reputation and a great experience.

This is a warning for every one of you: if you are considering getting an eyeball tattoo, you just have to do one thing first. Google image search ‘scleral tattoo gone wrong’ and see if your stomach can support the results it gives you.

Every person has to very careful when it comes to taking such a big step.