Home
Blog
When And How The Olympic Rings Tattoo Trend Started?

There was one tattoo that you probably repeatedly saw all over the Rio 2016 Olympic Games. It was a rite of passage for many athletes with Olympic experience to get the five rings synonymous with the games tattooed on their body in some form. 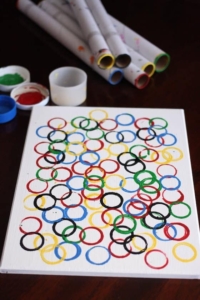 The Olympic symbols are icons, flags, as well as symbols that the International Olympic Committee or IOC uses to elevate the Olympic Games. Some, like the fanfare, flame, and theme, are commonly used during the Olympic competition. However, others like the flags can be present throughout the years.

The Olympic flag was actually created under the guidance of Baron Coubertin in 1913, but he released it in 1914. It was hosted for the first time in 1920 in Antwerp, Belgium, at the 1920 Summer Olympics in the main stadium. The five rings actually represent the five continents of the world.

The rings are actually five interlocking rings, colored blue, yellow, green, red, and black. They are placed on a white field, and they are universally known as Olympic rings. Baron Coubertin originally designed the symbol in 1913. He appears to have intended the rings to actually represent the five continents: Europe, Asia, Africa, America, and Oceania.

According to him, the colors of the rings together with the white of the background composed the flag of every competing nation at that time. The popularity and widespread use of the symbol started during the lead-up to the 1936 Summer Olympics in Berlin.

The Olympic rings are one of the most recognizable logos out there. However, those rings were not dreamed up at the advertising agency. They were actually hand-drawn on a letter to a colleague by the father of the modern Olympics. Every detail of what he draws has its own specific and symbolic meaning.

Just like we already mentioned, the five interlocking and different colored circles symbolize the five inhabited continents of the world. Moreover, a less known fact is the association of the number four with the planet Venus in astrology. Every four years, the planet Venus returns to the same point of the Zodiac. This is much like the four year period between the Olympics.

It is believed that the Olympic symbols tattoo tradition started in Los Angeles games in 1984. Here, the Canadian swimmers Alex Baumann and Victor Davis had a tattoo of a maple leaf on their chests. However, Davis inspired Chris Jacobs, an American swimmer, to get a tattoo of the Olympic rings. This was before the Olympic Games in 1988. He won three medals and was the one who started the tradition for the US swim team.

“Family and friends see the tattoo as special, unique and something for which we should be proud. The reaction from other Olympians tends to be fairly consistent, most appreciating the idea, with the greatest amount of time spent deciding on the best part of their body to display the work.”

Olympians from all over the world have some version of the five rings tattooed on their bodies. One British Paralympic swimmer, named Josef Craig, was disqualified from a race because his Olympic ring tattoo was showing an illegal advertisement on his body since. The Paralympic officials technically considered it illegal since their competition takes place under a separate flag.

Some might even opt not to get that tattoo. However, for many who have it, it is a permanent reminder of the incredible amount of work that it takes to earn the right to being called an Olympian. The US swimmer Missy Franklin, who won four gold medals in the 2012 Olympic Games, spent months considering where she would get the tattoo. She even called it a motivating factor for making the team as a 17-year-old.

For a lot of athletes, the Olympic path is easy to trace. Years of training in obscurity, and a nerve-wracking and life-affirming competition on the biggest stage in the world is not new for them. The medal podium is for the strongest, fastest, and smartest of the bunch. And after that, they get back home to visit a tattoo artist to memorize the whole affair for eternity.

The iconic Olympic rings were definitely ever-present across Rio de Janeiro. However, that was not only on the flags and the signage which wallpapers the city. For many people competing there, the rings were present on ankles, hips, biceps, and shoulders. It all started before, but 2012 was definitely the year when the tattoo tradition of the Olympic rings was on the top.