Bes or Bisu (feminine: Beset) is an ancient Egyptian (1550 B.C.E.) deity, worshiped as a protector of households, mothers, children, and childbirth. Later, he came to be regarded as the defender of everything good and the enemy of all that is bad. 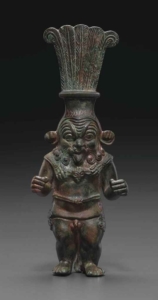 This image was used in tattoo art in the Egyptian New Kingdom. Usually, the deity was shown as a bearded, savage-looking yet comical dwarf, with a large head, pointed ears, a protruding tongue, bowlegs, and sometimes an erect penis. As a household deity, he was guarding against evil spirits and misfortune, and over time he came to be seen not just as warding off evil but also as bringing pleasure to merrymakers and as symbolizing sexual potency.

While some studies from the past identified this deity as the Middle Kingdom important from Nubia, some researches from more recently indicated that he was present in Egypt since the start of the Old Kingdom. Traces of this deity can be found in pre-dynastic Nile Valley cultures. But, his cult did not become widespread until the start of the New Kingdom. However, the introduction of Bes is also believed to be an imported Somali influence, and the worship of this deity to the north, such as the area of Syria.

Some modern scholars, such as James Romano, claim that in its earliest inception, Bes has been a description of a lion rearing up on its hind legs. After the Third Intermediate Period, Bes was usually seen as just the head or the face, usually worn as amulets.

In the period of the New Kingdom in Egypt, tattoos of Bes could also be found on the thighs of dancers, as well as musicians and servant girls.

One interesting thing is that Bes is also the earliest-known tattoo, which is not an abstract pattern at all. We will talk about Bes in the future again.