The Bastet cat, which looks much like a household pet of today’s modern world, is the representation of the Egyptian goddess with the same name. Initially, she was worshiped in the form of a lioness. 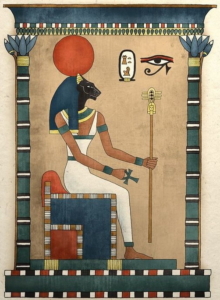 The Egyptian cultures had god and goddesses that had similar roles and the same art form. For example, in Upper Egypt, Sekhmet was the parallel warrior lioness deity. Usually, similar deities merged into one with the unification, but that did not happen with these deities having such strong roots in their cultures. Instead, these goddesses began to diverge. During the 22nd Dynasty, Bastet had transformed from a lioness warrior deity into a major protector deity represented by a cat. Bastet, the name also being associated with this latest deity, is also the name which is nowadays commonly used by scholars to refer to this deity. Bastet is also the protector of cats.

Originally, Bastet was a fierce lioness warrior goddess of the Sun throughout most of ancient Egyptian history. Still, later she was also seen as a defender of a Pharaoh, and as a result of the later chief god Ra. It is still unknown what the name of the goddess means.

Bastet was also considered as the goddess of sensual pleasures, protector of the household, bringer of health, as well as the guardian saint of firefighters. She was the original mistress of multi-tasking. Today, she is widely known as the “Cat Goddess.”

The Egyptian goddess Bastet also reminds us of all that is feline and feminine.  Her gifts, very cat-like, include the refusal to be at everyone’s beck and call and an insistence on the freedom of expression. Her teaching is to stay calm and never waste excess energy, reminding us to enjoy in beauty, hedonism, and to conquer the graceful movement.

In regions where her worship was especially popular, there are some bronze statuettes of her found there. At first, she is considered as the goddess of the home, and later became a goddess of war.