With each passing day, bullet tattoos are getting more and more famous all over the world and, therefore, more acceptable in the tattoo culture. People that have a different approach towards life are the ones that find bullet tattoo fascinating. And, it is not for imparting symbolism entwined with violence, but it is rather for its similarities with something aiming straight at rebelliousness.

Even though some gun and hunting enthusiasts might use a bullet tattoo in a manner which is similar to some other body or pastime images, the design has a more violent theme. Since the bullet was essentially designed to harm or kill people, it is fundamentally a symbol of both aggression, as well as hostility, like the weapons with which is connected. 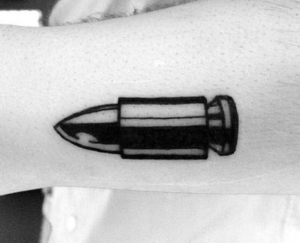 Bullet tattoos are the natural adjunct to gun tattoos. The tattooed men used the bullet as a sign of straightness. With this symbol, they seek to show their fearlessness in the face barriers, which complicate the process of achieving the goals they had. This tattoo is also included in the category of frightening. Tattoos with bullet patterns are very popular among the military. With this image, it can be shown that the holder of the tattoo has the experience of objection to military service. It also symbolizes the courage, bravery, as well as fearlessness. For the military, bullet tattoos act as a talisman, which at any moment protects the wearer from head enemies. Also, it is represented to be a reminder of the injuries.

Usually, a person that wants to have a bullet tattoo does not have the goal of giving beauty to his or her body. Most likely, it is going to be a memorable sign, which symbolizes the loss of colleagues. The image is usually complemented by a variety of labels, the content of which expresses devotion to a certain kind of troops, as well as the country of fellow service.

For a more animated effect, bullet tattoos can usually be colored with silver colors. You can also combine this tattoo design with your favorite sayings and quotations.