The United States Marine Corps tattoos are usually large and bold and inked as a tribute to the military and respect for those who fight for our freedom. 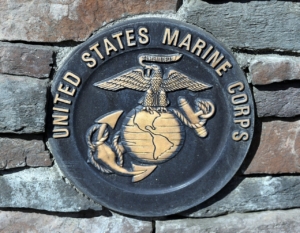 This is not one of those tattoo designs that you take lightly, and there is a specific protocol that is required, and especially for those who are currently serving in the Marines.

No matter whether you are currently in the military, want to pay tribute to a fallen soldier, or are a civilian proud of these soldiers, Marine tattoos are an excellent choice.

The USMC tattoos are designed with one purpose only, and that is to represent the United States Marine Corps. This is a tattoo design that, just like few other designs, does have some regulations as far as application goes with those in the military. Marine soldiers are obligated to have papers that show they will abide by specific rules before getting inked.

That being said, even civilians can get these powerful and patriotic tattoos for several reasons, such as they represent their country, their pride, and even their love of a fellow Marine.

The History of the Marine Corps Tattoo

After soldiers who served in the military saw 17th-century French soldiers getting inked in the South Pacific, a flame was ignited that still burns brightly today for those wanting to get inked to show their pride in their country.

Even though the French soldiers decided to stop this practice due to health concerns, the method of getting tattoos in the United States took hold and is still popular today.  Those people who are currently serving in the marines must get the proper papers and approval first to get Marine tattoos.

For civilians, however, these rules do not apply, although you must understand precisely what your tattoo represents before you see a tattoo artist.

The Meaning of the US Marine Corps Tattoo

Although this tattoo is common with men, it isn’t out of the realm for women in the Marines to get this design inked on their bodies. There are various designs of the USMC tattoos, but they all tend to have some of these main components. Usually, within the design are included the letters USMC, the globe, an eagle, and anchor, a bulldog, and dog tags.

The eagle stands for America, the globe represents the presence of Marines fighting and fallen around the world. The anchor symbolizes the Naval history associated with the USMC or how the Marines are stretched from coast to coast.

The combination of these symbols together represents a commitment to the country, courage, pride, family, respect, heritage, dedication, faithfulness, and success.

These patriotic tattoo designs ideal for both men and women come in all shapes and sizes. About this specific branch of the military, the US Marine Corps, the most famous symbols that can be incorporated into the design range from the eagle, bulldog, anchor, and globe.

The symbols that are incorporated within the USMC tattoo can enhance the meaning of the wearer. The most common symbol, for instance, is the bulldog. This symbol is used to represent the strongest and bravest soldiers in their operations.

The dog tags are becoming a very popular choice because they can represent a fallen brother or all the fallen Marines that have sacrificed their lives for the country. For other people, draping the dog tags over the heart is a symbol of the protection of the Marines by God while fighting in the fields.

The skull as a symbol incorporated into USMC tattoos stands for soldiers who have been engaged in war, symbolic of a determination to take on anything on the battlefield. When the Semper Fidelis is incorporated into the USMC tattoos, that means “Always Faithful,” also known as a code used by all Marines around the world.

At the very basis of these tattoos are values of fidelity and faithfulness, a bond unlike any other in the world throughout the military.

No matter whether you are representing time served in the military, a fallen soldier, or the love for all Marines, these are some of the most powerful tattoo designs that stand for strength, dominance, and unconditional love for this country at the deepest level.

Placing the US Marine Corps Tattoo

The place where you ink Marine tattoos can be as symbolic as the subject matter of the design. While there is no restriction as to where to place this tattoo for civilians, those in the military must abide by specific rules and regulations.

Most of the Marine tattoos are inked on parts of the body that can be easily seen for obvious reasons. They are, in fact, symbols of pride and honor and need to be out in the open for the world to see. The majority of USMC tattoos are inked on the bicep, upper arm, or legs.

This is not a typical tattoo that you want to conceal and allow only those intimate with you to see, this is a loud, proud, and bold statement you are making, so the bigger and more apparent the better.

The Marine tattoos are representative of someone who has a secure connection to the military and pride in their country. Those who choose these tattoo designs are some of the strongest, bravest, and proudest people.