Tattoos are like statuses inked on our skin. They are not only art, but they tell a lot of different stories. Different designs of tattoos have escalated very quickly from one place to another over the past years. Animal tattoos were always popular to get for both females and males. One of the biggest and strongest animals used in tattoo art is the elephant. 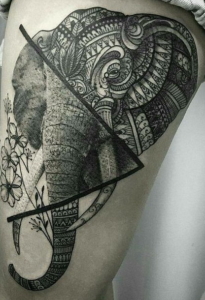 Elephants can weigh up to 8 tons and are generally considered the most dominant animals. Still, at the same time, they remain to be very graceful and even-tempered. They are not aggressive unless they are provoked. Also, they are incredibly loyal when it comes to family, and are considered very sacred among a lot of cultures in the world.

This is an animal that never forgets, and their old age only provides them with admirable wisdom. Human beings may learn a lot about life, solitude, as well as love when they study how this mammal from ancient times carries their weight, regardless of how heavy, with such remarkable beauty and grace.

These animals are the universal symbol of loyalty, strength, divinity, as well as good luck. They make an unforgettable tattoo design when they are carefully planned and properly placed on the temple of the body.

If you ever wanted to get a powerful tattoo with a lot of meanings, an elephant tattoo design is going to be the most appropriate for you. Elephants are revered, beautiful, and calm, but they can also be frightening creatures.

Elephants are often calm animals, but when they are wronged, they can turn into powerful foes. They are loyal, noble and dedicated animals. In Hindu, the elephant is actually the God of Luck and Fortune. They are also seen as blessings upon some new projects. So, an elephant tattoo will be the symbol of the unstoppable force on the hard road in order to accomplish a certain goal. You, just like the elephant, overcome some obstacles on your way. In the Christian religion, the elephant is a symbol of chastity and patience.

However, why are there people that choose to get elephant tattoos? Well, as this animal is an intoxicating statement of both grace, and power, determination and patience. It will be a perfect tattoo for you if you are a gentle warrior within you.

Like some other animal symbols, the elephant differs radically in the East from the West, when it comes to symbolism. In the West, the elephant is considered to be the very epitome of obesity, even though it is also connected with having a good memory.

However, in the East, kings rode elephants as symbols of heavenly intervention, stability, and blessing. In tattoo art, elephants are sometimes part of some wild nature scenes from the African savanna, and they represent distant wildlife and are sometimes even crowned as in Asian art. Of all the symbols of elephants, the Hindu god Ganesha is definitely the most common and recognized one.

If you are considering getting a small symbolic tattoo for your inner wrist or maybe a large design that is going to fill an area like your legs or back with grace, an elephant will make a fine choice for a lot of reasons.

Elephants are not only a symbol of compassion, memory, and empathy, but there is a strong connection of the species to Buddhism, as Buddha selected the rare white elephant for his incarnations. The white elephant is the symbol of fertility and wisdom, making it a beautiful choice for a maternal tattoo.

For tattoo lovers who seek a couple of tattoo designs that could ink a name or a wedding ring designs in fear of bad luck, as well as jinx their union, the stately elephant will be the symbol of loyalty and fidelity – two key elements in any successful union.

As we already mentioned, this tattoo design can symbolize or mean a lot of different things. Generally speaking, an elephant tattoo will depict good luck and prosperity. However, as of the role that it has in nature, it can also embody power, dignity, strength, as well as longevity.

Despite those that we mentioned, elephants can even portray patience, spirituality, honor, and intelligence. With all of these different meanings, these tattoos became more known as of its portrayal of family ties and ancestral lines.

There are a lot of ways to design an elephant for a tattoo. Some can be very elaborate and detailed, while others can be simple, suggesting only the silhouette of the magnificent mammal. If you are a playful individual, you can even take into consideration using a finger for the trunk and the side of your hand in order to represent the body of the elephant tattoo.

First of all, the more detailed your tattoo design, the larger its size has to be. For some small and discreet locations, the best option would be an outlined elephant tattoo. However, for those that want something more elaborate, adding henna inspired work alongside the elephant for pretty detailing, as well as fancy scrolling.

Another consideration would be how many elephants you would like to wear? Elephants usually travel holding onto one another’s trunks. This will be a sweet and symbolic way to honor your family and your loved ones.

For almost every person in the world, the elephant tattoo makes a beautiful and most-commonly chosen tattoo design. Not only for the meanings and symbolism associated with it but also for the beauty and fascination of the tattoo designs.