Have you ever wondered who the Anonymous are, what their white masks signify, and what is their purpose in the world? If you had, read below and find more details about this group and their activities. Anonymous are usually recognized by their black and white Guy Fawkes mask, which they use to hide their identity. 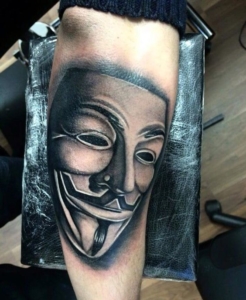 Anonymous is the selective group of online hackers that seemed to have no better and greater purpose than having some naughty fun.

Anonymous began in 2003 as a collective of web jokers hitting sites for fun. However, their activities took a more sinister turn.

Now, they are known as an anti-establishment group whose targets were ranged from big business and government departments all over the world to child sex abuse sites.

The Anonymous swamps sites trick targets into revealing some details about emails and utilizes computers to crack passwords.

This shadowy group has vowed to destroy the online recruitment service of IS, crippling its capacity to brainwash would-be members. The members of the group come from different parts of the world and all walks of life, discussing ops in secret online chat rooms.

The Guy Fawkes mask is a stylized depiction of Guy Fawkes, who is the best-known member of the Gunpowder Plot. The plot has been an attempt to blow up the House of Lords in London on the 5th of November 1605, so to restore the Catholic head of state. The use of this mask on an effigy has long roots as part of the Guy Fawkes Night celebrations.

A stylized portrayal of a face with red cheeks, a wide mustache upturned at both the ends, and also a thin vertical pointed beard, which was designed by the illustrator David Lloyd, came to represent a broader protest after it has been utilized as a main plot element in V for Vendetta, which was published in 1982, and its 2005 film adaptation.

After appearing in Internet forums, the mask also became a well-known symbol of the online hack activist group Anonymous, which is utilized in Project Chanology, the Occupy movement, and some other anti-government and anti-establishment protests all over the world.

The Guy Fawkes mask became the symbol for Anonymous – the same style of the mask utilized in the V for Vendetta movie of 2006.

Since that time, its popularity has skyrocketed, and the mask was commonplace at protests, particularly the protests affiliated to Anonymous, and online, where it accompanies Anonymous projects and is also the centerpiece of memorabilia stores devoted to the hacking group.

Anonymous become increasingly notoriously through attacks on organizations, which included CIA, Ku Klux Klan, Visa, and PayPal, under the flags of causes such as libertarianism and anti-capitalism.

So, the higher the profile of Anonymous is, the more we see of the historical Guy Fawkes mask.

The strangely stylized mask of Guy Fawkes with a mustache and pointy beard in 2006 movie utilizes Fawkes as a role model in his quest to end the rule of a fictional fascist party in the United Kingdom.

It was utilized for the first time by Anonymous in 2008 at the Project Chanology protest – a march that was against the Church of Scientology. The group also protested in response to the Church, forcing YouTube to pull a video of Tom Cruise discussing Scientology, which was meant for internal use within the Church. The Guy Fawkes mask became a popular method of hiding faces at the time of the anti-establishment protests all over the world since that event.

The attendant culture which gave rise to Anonymous was brewing for years before it finally flourished into something visible on the public stage, even to less tech-entrenched observers. However, since their campaign against the Church, they became a pretty prominent emblem of modern, as well as mass protest, even getting involved in Occupy Wall Street and Michael Brown and Tamir Rice shootings. And after all, we see more of those masks grinning pale faces with the thin black mustaches and the narrow and lifted eyebrows.

As we already mentioned, the mask that you see worn at Anonymous protests is called a Guy Fawkes mask, named after the seventeenth-century Briton, who infamously tried to bomb the House of Lords. He had some plans to assassinate King James I so that his Catholic daughter could ascend to the throne.

As for what the mask means to the individual wearers is hard to know. The personal motivations of Fawkes and also his actions needn’t weigh into a quite as much as resulting history and iconography. In different events, whether it is utilized in the barest utilitarian sense or as a paean to the well-loved work of Lloyd or Moore, or as a standalone icon of resistance to authority, it could feasibly now go down in history as the Anonymous mask.