Playing card tattoos are quite common these days. These inspiring adornments possess immense decorative value among men and women in every field. For example, for diehard casino fans, nothing is better than body art, which showcases a winning hand. One thing associated with a deck of playing cards is the joker. There are two jokers in the card deck. From a funny clown and a prankster, the joker took several forms throughout the years. The joker is actually like symbols as the clown, the fool, and the jester. However, its best association is with the deck of playing cards. 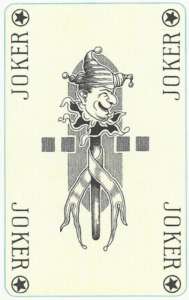 The appearance of the Joker resembles that of the court jester; however, their function resembles more that of the fool of tarot cards. The jokers stand outside the main deck. Sometimes, they find their uses in card play, and sometimes not.

When used in a game, they have some special properties, not granted to the other cards. It isn’t unusual for this card to find its use as a visual sort of visual pun. This indicates that the tattoo wearer might be something of a “joker” him or herself.

The card is the inspiration for many tattoo ideas and designs. You can find many different joker tattoos. However, the most mainstream ones authentically depict the Joker character from the Batman series.

These tattoos were always eye-catching for the people around. The different types of tattoos help to express the attitude or feelings one carries in his lifestyle. There are many interesting tattoo designs for men and women, together with their meanings and images.

Some of the most common meanings related to joker tattoos are:

A joker is actually someone who gets pleasure and joy by playing tricks on other people. They are often mischievous, gaining happiness from other people’s misfortune. They are also evil, sometimes. On the brighter side, he just wants to be the life of the show and often is.

The jokers on playing cards and Tarot cards are often a motif in such tattoo designs. These jokers are often wearing a pointed hat and similar clothing as seen on the cards.

As artists can represent the joker in many different forms, the meanings of this tattoo can be different too. This depends on what it represents.

These are the most popular variations of this tattoo and their meanings:

A jester is a medieval version of what we know today as a clown. It is actually the symbol of quick with, as well as intelligent humor. A person that would get this tattoo sees it as a way to express their cheerful personality. They really like harmless pranks and mockery and are often the life of the party.

Also called the Fool, this one is the symbol of new beginnings and journeys. It actually represents potential, curiosity, and creativity. People that get this tattoo see themselves as free-spirited and adventurous. They also believe in taking leaps of faith and opening new areas of their lives. Moreover, they constantly grow and enjoy life to the full.

Almost every friend group has that one person that considers him or herself to be the wild card. That is exactly the type of person that will get this tattoo. They are actually foolish and spontaneous. They like unexpected events and surprises and often out of control. For them, tattoos of playing card jokers will be right.

Joker is actually the wild card. If you call a person a joker or a wild card, you are saying that they are mysterious, possibly reckless or irresponsible. These people are also a bit loony or unpredictable, as well as nonconforming. They are the black sheep, the crazy one that may either benefit or also hurt the game. You can never know what jokers will do or how this wild card will behave. You cannot control the wild card. He actually has a mind of his own and obeys his own rules.

This movie character was so powerful that he gave an entirely new meaning to the idea of the Joker. Rather than being a goofy trickster, we now see it as the symbol of disturbance, chaos, and madness. It is the complexity of this particular character that made people identify with it so much. It has become the most popular version of the Joker tattoo.

Those people that believe this tattoo fits their character are usually mischievous and provocative. They take joy playing tricks on other people and do not really care when they take it too far. They are rebellious and others can’t control them. However, on the bright side, they are entertainers.

These are the most popular variations of the Joker. Think carefully before you decide to get this tattoo. We hope you like it!