Home
Tattoo History
Krishna, A Hinduism Deity In Tattoo Art: What Does It Symbolize?

Hinduism is the major world religion, which originates from the Indian subcontinent. It comprises several and various systems of belief and philosophy. The name Hinduism is relatively new, as some British writers coined it in the first decades of the 19th century. However, it refers to a rich cumulative tradition of practices and texts, some of which date to the 2nd millennium BCE or even earlier. 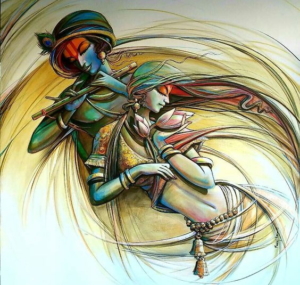 If the Indus valley civilization was the earliest source of these traditions, then Hinduism is the oldest living religion on Earth. Its various sacred texts in Sanskrit and vernacular languages were the vehicle for spreading the religion around the world. This was often done through ritual and the visual and performing arts, which had an important role in the transmission.

From about the 4th century BCE, Hinduism had quite a dominant presence in Southeast Asia. This presence is one that would last for more than 1,000 years.

During the early years of this century, Hinduism had almost one billion adherents around the world. It was the religion of about 80% of the population of India. Despite its global presence, it is best understood through its various distinctive regional manifestations. Moreover, it is famous for its gods and deities, who are everyday motifs for different types of artwork.

One such deity is Krishna. Despite that Krishna is one of the most beloved Hindu deities, he is also famous for his use in tattoos.

Shree Krishna, or just Krishna, is the major deity in Hinduism. Hindu people worship him as the eighth avatar of the god Vishnu and also as the supreme God. He is the God of compassion, love, and tenderness in Hinduism. He is one of the most popular and widely revered among the Indian divinities.

Hindu people celebrate the birthday of Krishna every year on Krishna Janmashtami, according to the lunisolar Hindu calendar. It falls in late August or also early September of the Gregorian calendar. People often depict Krishna with a flute in his hand.

The narratives and anecdotes about the life of Krishna are famous by the name Krishna Leela. He is the central character in the Mahabharata, the Bhagavata Purana, and the Bhagavad Gita. He is also present in various Hindu philosophical, mythological, and theological texts.

They portray him in different perspectives: a prankster, a god-child, a model lover, and a divine hero. They also depict him as the universal Supreme Being. His iconography reflects these legends and shows him in various life stages like an infant, or a friendly charioteer.

Krishna is one of the most beloved and popular of the Hindu deities. That’s why it is logical that he is a frequent subject of Hindu tattoo art. Tattoos usually represent him as a beautiful young man with flowing black hair and blue-black skin. He plays the flute, and he is the avatar or incarnation of the great protector god Vishnu.

There are various tales of his life, as well as exploits from various sources. The chief and maybe the most notable of his characteristics is his ability to reveal divine love in human love. In folklore, his earthly relationships with women are the same type of loving relationships existing between God and human beings. His very person actually comes to embody the ideal relationship between the soul and God.

To celebrate Lord Krishna means to celebrate the ideals of love, tenderness, and compassion. It will take a real man to celebrate these attributes. Any person that looks for a tattoo that stands out may like the confidence which comes from Krishna tattoos.

Just like we already mentioned, Krishna is a deity in the Hindu religion. People believe that he has the energy and power that outshines the rest. Those that believe in Krishna celebrate the principles of truthfulness, self-control, mercy, and cleanliness. They celebrate these principles while striving to achieve the ideal balance in their lives.

Krishna designs definitely make for highly unique ideas. This is mainly for those that are interested in living peacefully and in harmony with themselves and the world.

Krishna tattoos may be the symbol of time spent in India. This is the country where the people admire Krishna more than in any other area of the world. Being a particular part of Hinduism, you can pay tribute to a country and its gods with this beautiful tattoo. It is, in fact, the epitome of peace, as well as self-control.

The Krishna tattoo designs are usually mystical, with watercolor techniques and light colors. This is because Krishna is the symbol of light for many. However, you can always get a darker design to blend in with the other pieces you may already have on your body. One way or another, Krishna tattoos will symbolize appreciation of this culture and religion and enlightenment.

We hope that you like the tattoo of this popular Hindu deity.