According to a lot of scholars, Hinduism is the oldest religion in the world. Its customs and roots date back more than 4,000 years. Nowadays, with about 900 million followers, Hinduism is the third largest religion behind Christianity and Islam. Almost 95% of the Hindus in the world live in India. One of the most prominent figures in Hinduism is Ganesha or Ganesh, who is one of the main figures for overcoming obstacles. Here, we will talk more about Ganesha and its use in the tattooing world. 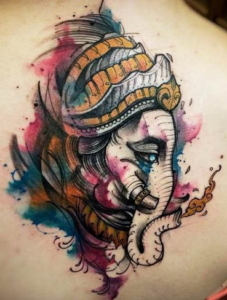 As religion has no specific founder, it is hard to trace its origins and history. Hinduism is unique in that it is not a single religion. It is a compilation of several philosophies and traditions.

Most scholars believe that Hinduism appeared between 2300 B.C. and 1500 B.C. in the Indus Valley, near present-day Pakistan. However, many Hindus argue that their faith is timeless and always existed.

In the last century, Ganesha or also Ganesh became more popular, particularly in the West. He is a Hindu god that has an elephant head and is best known as the remover of obstacles. It is hard to think of a more apt figure for overcoming obstacles since the appearance of the elephant head has its story too.

The elephant head appeared as a result of an early accidental death at the hands of his father, Shiva. The father, who realized the mistake, took the head of a passing elephant and breathed life back into the body.

Like many other images in Buddhist or Hindu art, almost every feature of this god has symbolic meaning and content. The number of arms that he has can vary from one portrait to another. However, typically one hand is held in a pose of protection and refuge, while the second a sweet food. This food symbolizes the sweetness of the realized inner self. There is a third hand that holds an elephant goad with which to prod man to the path of righteousness. The fourth arm holds a noose, in order to represent worldly attachments and desires.

The potbelly symbolizes the bounty of nature and even the idea that Ganesha swallows the sorrows of this Universe, and even protects the world.

Ganesha is one of the most renowned Hindu gods that people worship not just in India but across Asia. People worship this god even in other different parts of the world. With the head of an elephant, people highly recognize him, and it is generally the figure that people use to represent the Hindu religion.

Ganesh is very popular that he even has spiritual importance for a lot of people that are not Hindu at all. His image even became a famous tattoo design as a symbol of spirituality, godliness, and religion.

In the Hindu religion, Ganesha is the Lord of beginnings, so people usually call it upon at the beginning of rituals or ceremonies. In tattoo art, usually, symbols such as flowers or birds symbolize new beginnings, as they represent the spring season. Tattoos of Ganesha are usually used in combination with flowers, particularly the lotus flower. In a lot of tattoos, the god Ganesha sits on a lotus flower in the lotus position in a symbol of spiritual openness.

Ganesh is also said to be the god of prosperity and success. People usually worship the image of Ganesha and its statue for good luck. So, having a tattoo of Ganesha, people believe that they will carry the symbol of good luck with them forever.  They also believe that Ganesha is going to remove every obstacle which is going to come in their lives.

Getting a tattoo of Ganesha will be a unique tattoo idea. There are people who think more than only worshiping sculpture or image. They come forward and want to have these tattoos and symbols on their bodies. They want this as it symbolizes good luck and also prosperity and success. They want something which can simply stay with them forever. So, they go for Ganesha tattoos.

Tattoos of Ganesha are as many times as ornate as the religious artwork, which is their basis. However, they can occasionally be simple blackwork. There are different kinds of tattoo designs available. As of the different poses of Ganesha, such as dancing or sitting, or playing with family, a lot of designs exist.

Ganesha has just one tusk, which symbolizes keeping the good and not being afraid to lose the bad one. Getting a Ganesha tattoo is always going to motivate you towards your goals and dreams. This will help you in achieving them too.