We are all familiar with the cruelty of the World Wars, which utilized entire populations with only one purpose, defeating enemies. During World War I, women were encouraged to work in the industry and take over jobs that were previously done by men. This was also the case with World War II, during which due to a shortage of male 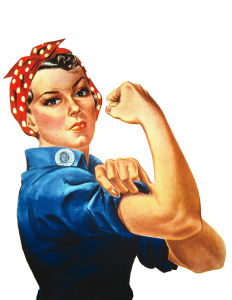 However, being able to help soldiers during the war, making all the necessary products made these women very proud and accomplished. After women accepted the challenge of the workforce, they continued making a substantial advance towards equal rights. Rosie the Riveter is a character that was created during World War II and who was part of the propaganda campaign to encourage women to join the workforce. Rosie became a symbol of the housewife out in the workforce for the first time playing her part for the country. This term ‘Rosie the Riveter” was first used in 1942 as the name of a song that was written by Redd Evans and John Jacob Loeb.

In a short time, the song became a national hit. In the song, Rosie is portrayed as a patriotic, tireless worker who received “Production E” during her time to help the American time effort. There were other interpretations of the symbol. Another famous one was the painting from 1942 by J. Howard Miller, which was based on an actual female worker. The name of the worker was Geraldine Doyle. During World War II, Rose the Riveter appeared in many incarnations.

Nevertheless, one of the most famous versions is definitely the one with the white young woman wearing a pair of blue coveralls and a red bandana to tie back her hair, crooking her right arm and grasping her bicep with her left hand. From her mouth, there is a speech coming out that says, “We Can Do It!” Soon after, Rosie the Riveter became a symbol of patriotism and a cultural icon not only for women but also for men. She stands for the idea of American perseverance through a difficult time in American history. In the postwar, Rosie remained as a feministic icon and symbol. Those women who were part of the workforce were referred to as “Rosies.”

Many claimed that she forever opened the workforce for women. For a lot of people, World War II represents a significant turn point for women because of their enthusiastic support for the war effort. However, some historians did not agree with this statement and emphasized that this change was only temporary because immediately after the war, women were expected to return to their every day and traditional roles as wives and mothers. Others claimed that, for the first time, working women dominated the public image. Even after the war ended, all the women were quickly laid off from the factory jobs “Rosies,” and the generations that followed them knew that working in factories was indeed possible for women. However, they never reentered the job market in such large proportions.

Today Rosie the Riveter is still a popular figure that inspires women. These fascinating and empowering women stepped up in the face of adversity and did their part for their country, their families, husbands, and sons. Today, Rosie the Riveter is serving as a symbol for modeling life. Rosie is even as popular as a feminine tattoo. This tattoo design stands for strength, independence, empowering, equal rights, power, triumph, or anything you want. The tattoo design of Rosie the Riveter is usually done in the style of the previously mentioned incarnation altogether with the slogan “We Can Do It!”

Since the first appearance, tattoos are something that