If you are always on the lookout for interesting art and unique tattoos than a tattoo of a scarecrow is an ideal choice for you.  Surprisingly, there are a lot of people, both men, and women, who are interested in this type of tattoo design. What is unique about the scarecrow, as far as it relates to pop culture, is that it has a fascinating history in that it can be used to represent pure evil and, at other times, revenge. 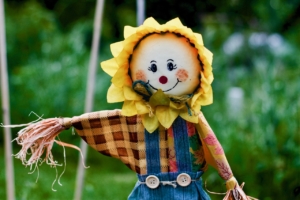 If we go back in time with Disney, there was even Dr. Syn Alias. This was a legendary figure in the time of King George III. Furthermore, we are all familiar with the famous lovable scarecrow in the Wizard of Oz, who always said, “If I only had a brain.”

The scarecrows, both symbolic and helpful, have played a fundamental role in human settling, but beyond its utilitarian function, scarecrows distinctly portray a humanoid figure that can often be taken as unnatural and unsettling. Perhaps they do more than scaring the crows and representing images that conjure fear and a sense of hollow creatures that will undoubtedly come to life. There is a whole range of scarecrow tattoos going from evil beings, lovable goofs, to whimsical creatures.

The depictions of the tattoo vary depending on the nature of their intent, whether the adaptation arrives from the words of L. Frank Baum, the spooky nightmares of a horror film, or the supervillains of a comic book. Tattered clothes stuffed with straw and a terrifying pumpkin head drenched with a drooping, and dangling from a post are one of the most often chosen design.  Most of the scarecrow tattoo imagery is dark, curious, and sinister– the exact function of a scarecrow, after all the word “scare” is in the name. Although they are inanimate, our minds can sometimes have difficulty accepting this reality.

Do scarecrows represent hollowness within? Are they simply meant to scare the crap out of us? Scarecrows are famous for being decoys, and many who obtain a tattoo of this type feel the same. The symbol of not being who you say you are is usually related to this tattoo. A scarecrow embodies the experience of existing to warn others away. Wanting people to stay away from is easily displayed through the imagery of a scarecrow. Tattooing one’s face on the scarecrow is typical as it represents them.

There are different designs of scarecrow tattoo, and only some of them are:

This type of scarecrow tattoo is the funniest and winsome of all the designs, and that can be seen from the hilarious gestures designed into the scarecrow. Everything is cool about this tattoo design, but the most exciting detail is probably the big hat that he can wear. The design can also include ace of spades sticking out is from the hat. Nothing is bothering this man of straw represented in this design.

This is an impressive piece of art that includes the goofy but fun design from the Wizard of Oz. It was and still is impossible not to like this guy and root for him as an underdog. The artwork in this design is fabulous, and the choice of using black and brown colors, along with a smattering of lighter hues, really makes this scarecrow stand out. Great choice of a scarecrow tattoo design.

This type of tattoo design includes a more scary and ominous scarecrow. It represents a creepy design due to no other reason than the way the mouth is designed. Concerning the design, the head is made to look layered and textured through the use of shadow. Also, this design is usually done with dark ink around the rope surrounding its neck to make it stand out. The hat is done in color.

Even though this scarecrow is in the position most of us think of when used to scare off the birds from the crops, the sense is when you look at him, he’s far from being just a good set of clothes stuffed with straw.

The tattoo is done in color and detail, and I like the way the weeds of the field form at the bottom are added, along with the pumpkins, to add to the scary feel and look. There can also be a flower and weed sticking out of that cool hat, adding cooler look. This scarecrow, because of the inclusion of pumpkins and the farm scenario, would work at Halloween.

Evil One with Pumpkin Head

A small percentage of these tattoos include those with an evil pumpkin head, due to the nature of this design that has a sinister look to him as he gets ready to go about doing no good. The tattered shirt, straw hat, and face of horror make this a memorable tattoo without question. It seems as if the mist-like stuff swirling around it in this design is a spirit about to enter into it to give it life.

As previously mentioned, the scarecrow is a really compelling choice for a tattoo design, because it is used in so many ways as a figure. The designs presented above are only some of the possible tattoos of scarecrows.

Freyr: The Norse God Of Prosperity With Powerful History

Freyr was a Norse god of peace and