Home
Tattoo Meanings
Halloween: Ancient Origins, And When It Appeared In America?

On the day of Halloween, the walls between our world and the next are thin. These walls allow spirits to pass through and be present among us during the night. Here, we are going to talk about Halloween and what it is. We will also mention the origin and meaning behind All Hallows’ Eve. 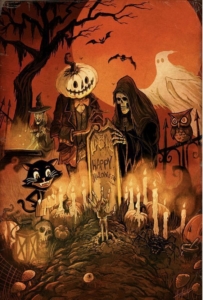 Halloween or Hallowe’en, also known as Allhalloween, All Hallows’ Eve, or All Saints’ Eve, is a celebration that several countries in the world observe on the 31st of October. This is the eve of the Western Christian feast of All Hallows’ Day.

It is a wide belief that a lot of Halloween traditions originated from ancient Celtic harvest festivals. This refers, particularly to the Gaelic festival Samhain. Such festivals probably have pagan roots. The early Church itself Christianized the Samhain festival. Some people believe that Halloween started only as a Christian holiday, separate from some ancient festivals.

In different parts of the world, the Christian religious observances of All Hallows’ Eve remain popular. These observances include attending church services and lighting candles on the graves of the dead. However, elsewhere, it is a more commercial, as well as secular celebration.

Some people don’t eat meat on Halloween. This is a tradition which is reflected in the eating of specific vegetarian foods on this vigil day. Such foods include apples, soul cakes, and potato pancakes.

The Celts, who have lived 2,000 years ago, celebrated their New Year on the 1st of November. These people lived in the area that is now Ireland, northern France, and the United Kingdom.

This day was the one that marked the end of the summer and the harvest. Also, it marked the beginning of the dark and cold winter. The winter was a period of the year that usually found its association with human death. These people had one belief related to this. On the night before the New Year, the boundary between the worlds of the dead and the living became blurred. On the night of the 31st of October, they celebrated Samhain. They believed that on this night, the ghosts of the dead returned to earth.

Additionally, to causing trouble and damaging crops, the Celts believed that the presence of these spirits made it easier for the Druids or Celtic priests, to make some predictions related to the future. As they were people completely dependent on the volatile natural world, the predictions were a significant source of comfort. Also, they were their directions during the long and dark winter period.

To commemorate this event, Druids built huge sacred bonfires. Here, the people gathered to burn crops and animals as sacrifices to the Celtic deities. During the celebration, they were wearing costumes. These costumes usually consisted of animal heads and skins. Also, they were trying to tell each other’s fortunes at the time of the celebration.

When the festivities are over, they fire up their fires again. They had extinguished these fires earlier that evening. They re-lit them from the sacred bonfire, in order to help in protecting them during the coming winter.

As a result of the rigid Protestant belief systems in colonial New England, the celebration of Halloween was extremely limited there.

The customs and beliefs of different European ethnic groups and American Indians meshed. As a result of that, a different American version of Halloween started to appear. The first celebrations included “play parties,” and public events held to celebrate the harvest. Here, the neighbors would share their stories of the dead, dance and sing, and tell each other’s fortunes.

Colonial Halloween festivals also featured the telling of ghost stories and mischief-making of all types. By the middle of the 19th century, the yearly autumn festivities were common. However, Halloween has still not been celebrated everywhere in the country.

It was just in the second half of the 19th century when Irish immigrants flooded America. This happened as a result of the Great Famine from 1845 to 1852 in Ireland. In this way, the popularity of Halloween spread and grew.

By the early 20th century, Halloween had lost most of its religious and spiritual meaning. This happened because of the move in America, making the festival less scary and more about community spirit. In America, Halloween is the second-largest celebration after Christmas. Americans spend about $6 billion on Halloween every year.

The customs of Halloween go back centuries. They are deeply steeped in tradition and religion that nothing about this holiday seems strange to us.