The Hexagram has been associated with Judaism and the Jewish kingdom for at least 2,000 years. The six-pointed star is actually composed of two equilateral triangles, one pointing up and one down. In this basic geometric sense, it can be seen as the union of opposites, a simple unity that, at the same time, results in something complex. 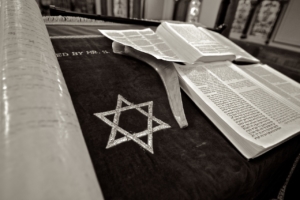 The hexangular Star of David is considered to be one of the oldest and the most mysterious symbols in the whole world. The fact that scientists all over the world used to find and still do find ancient objects with Hexagram (Star of David) images on them proves it. Hexagram has a lot of names; it is also called “the Star of David,” “Solomon’s seal” and “Magen David.” But there are so many more meanings and implications of it. Regardless of its old and mysterious history, it’s widely used nowadays. Israel’s state flag with the Star of David on it doubtlessly proves this fact.

Some people are mistaken into believing that the Star of David is solely a Jewish community symbol. Of course, a hexagram is a symbol of Judaism, but the reality is that its images can be found in all the confessions. In older times, only priests and monks could have a hexagram image on their bodies. Those who possessed such an image on their bodies were considered to belong to a privileged caste and as close to God as no one else is. The Star of David symbol’s not permitted application was considered to be impudent and blasphemous.

JEWISH AND ASIANS: EVERYONE HAS THEIR OWN DAVID

Star of David or Solomon’s seal is most often associated with the birth of the Jewish religion and culture. The written testimonies, narrations, and legends that have survived to this day emphasize the great importance of David in the formation of the mentality of the Jewish people. But the hexagonal star has the same meaning for the Chinese. For them, it is a symbol of the union of the male and female origins of yin and yang. And the hexagonal star has never been a negative symbol. It demanded the highest moral deeds by definition. From this point of view, Star of David chosen for the tattoo can denote the ethical principles of the one who decided it. Nobody maintains official statistics, but there is a reason to believe that this image is inked by people with a belief in their hearts and moral principles.

TATTOO NOT FOR GENERAL VIEW

This definition fits perfectly with the tattoo of Star of David. Nowadays, the classic places for inking it have already been defined: it is the back or upper part of the arm, shoulder, and forearm. This is how a unique, respectful attitude to everything that stands behind this sign is emphasized. On the Internet, you can find quite a lot of tattoos with the image of the star between blades.

When choosing a place to work with this symbol, the professional artist will surely tell you where to ink the tattoo. And further details can be specified — color and shape, size, density, etc. The main thing is that the symbol doesn’t offend the meaning, doesn’t violate the sacred essence.

WHAT DOES STAR OF DAVID TATTOO MEAN?

The Star of David’s image is familiar among tattoo artists. This symbol even has its history. In the 1950s, a book explaining the most popular for that time tattoo meanings was released in France. The book said that this type of tattoo was mostly applied by seamen. They believed that this symbol was a kind of amulet for them and helped them come back from long – term navigations safe and sound. Approximately at the same time, Russian scoundrels used to have themselves tattooed by quadrangular stars, stellar octangular, and the Stars of David as well. They wanted to show their disagreement with that time’s political regime. People having such type of tattoo on their bodies were held in respect among prisoners while applying a hexagram without permission was not allowed, and those who did it were punished and could even be killed. The Stars of David were usually applied on a breast or shoulders. This tradition still echoes nowadays.

We can freely say that today The star of David is a very flexible design that links itself to various cultures around the globe. This is a symbol that holds a lot of human history and deep or profound meanings. These meanings are a big part of our everyday life. They are great to help to guide us to better physical and spiritual growth.