Geometric tattoos can come in different designs and colors. This can go from entirely abstract, to a different type of interpretation of famous images. Such images are commonly present in different artwork, or they can even be an inspiration for something else. Regardless of the intention of the person with geometric tattoos, each of them is surely going to look great. Geometric tattoos deal with a few lines or geometric shapes which come together in order to form a bigger shape. They can come in the form of lines, stars, leaves, and many other patterns. The reason why many people love geometric tattoos is that they can do anything with these lines and shapes. One geometric shape or figure which is commonly present in tattoo art is the hexagram, a six-pointed star, also called the Star of David. Keep reading and find something more about its meaning and use in tattoos. 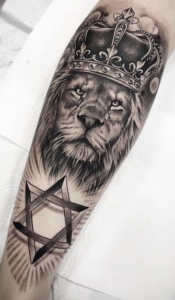 These tattoos are the ones that people will never regret getting. We can say that geometry is slowly taking over the tattoo art world. However, although they look beautiful, getting these tattoos may be risky, thanks to the shapes and curves of our bodies. For this purpose, we have to choose highly-skilled tattoo artists to create those geometric patterns on our skin.

The hexagram, its history, and its characteristics.

The hexagram from Greek, or sexagram from Latin, is a six-pointed geometric star figure. As there are no true regular, continuous hexagrams, the term instead refers to the compound figure of two equilateral triangles. The intersection is a regular hexagon.

The hexagram is part of the infinite series of shapes that are compounds of two n-dimensional simplices.

The hexagram found its uses in history in some cultural and religious contexts, and as a decorative motif. For instance, the medieval Muslims, particularly Maliki and Hanafi dynasties, utilized it. Later on, it found its uses in occultism and Judaism too. Christians also used the symbol simply as a decorative motif in their churches before the Jewish synagogue used it for the first time.

The Arabs used it as a religious symbol for the first time in the medieval period, known as the Seal of Solomon, and depicted as hexagram or pentagram. Later on, the Jewish Kabbalists also adopted it.

The Star of David or the Shield of David.

The Star of David, or also the Shield of David in Hebrew, is the symbol of the modern Jewish identity and Judaism. The shape of this symbol is that of the hexagram, the compound of two equilateral triangles. However, the Star of David was never a uniquely Jewish symbol.

This symbol became representative of the Zionist community around the world. Later, it represented the broader Jewish community, after choosing it as the central symbol on a flag at the First Zionist Congress in 1897.

The earliest Jewish usage of this symbol was inherited from the medieval Arabic literature, for use in talismanic protective amulets. There, among the Muslims, it has the name the Seal of Solomon. Christian churches also used this symbol as the decorative motif several centuries before the Jewish synagogue used it.

Symbolism and meaning of hexagram.

As we already mentioned, the hexagram is a six-pointed star, composed of two overlapped triangles. One of the triangles points down, while the other points up. The most famous hexagram is the Star of David. However, there are a lot of other types of symbolism which applied to this symbol over time. Such symbolism dates back from at least 600 B.C.E.

Alchemists from the middle ages used the hexagram as the general symbol, which represents the art of alchemy. It is also the sign of the combination of the fire and water elements. In the tradition of India, the symbol stands for the marriage of Shiva and Shakti. In terms of Jungian psychology, the symbol represents the union of opposites. It can even refer to the union of the physical and the spiritual, with spiritual reality reaching down and physical reality reaching up.

According to other beliefs, the two triangles represent the “male” and the “female.” For example, in the Seal of Solomon, it represents the divine union of man and woman, creating the perfect love. Because of this, it is the symbol of the heart chakra too.

The triangle is a central symbol in Christian iconography because it represents the Trinity and, in that way, spiritual reality. Because of this, the use of the hexagram in Christian occult thought is relatively common.

As the hexagram has many specific uses and meanings in cultures and religions, it is a common motif for tattoos. Sometimes, the hexagram tattoo is represented alone, and sometimes it can be in combination with various other elements. Such elements could be other geometric forms and figures, numbers, or even everyday objects.

Generally said, geometric tattoos are more and more popular these days. They may become the most popular ones very soon, without any doubt.