Home
Tattoo Meanings
The Ball – Different Meanings In Older Civilizations And In The Tattoo Art.

A ball is a round object which is usually spherical, but it can sometimes be ovoid, which has different uses in different “lifestyles.” It is used in games, with balls where the play of the game reflects the state of the ball as it is hit, kicked, or thrown by those that play. 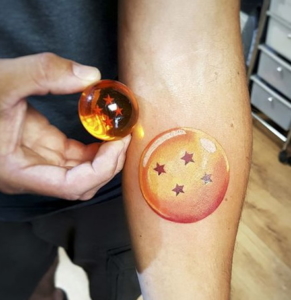 Nowadays, there are various modern games played with a ball or balls and subject to rules are treated under their various names, such as polo, cricket, football, and so on.

Balls can also be used for some simpler activities like a catch, marbles, and juggling. They are made from hard-wearing materials which are used in engineering application to provide very low friction bearings, known as ball bearings. The black-powered weapons also use stone and metal balls as projectiles.

The first time when the world ball was used in the English language in the sense of a globular body that is played with was in 1205. The word came from the Middle English word ball. In the later Middle English spelling balle, the word coincided graphically with the French balle “ball” and “bale,” which has hence been erroneously assumed to be its source.

The ball, which is usually drawn in two or three dimensions, also had some symbolic significance in a lot of older civilizations, and it was also connected with the sun or movement through space.

In the ancient Mexican art, there were also games with balls depicted, while they were also mentioned in the famous work of Homer, Odyssey.

Among the Greek, the games with balls were seen as some kind of a useful subsidiary to the more violent athletic exercises, as well as a means of keeping the body supple and rendering it graceful. Still, they were generally left to boys and girls.

Even in the Christian church in France, somewhere before 1538, clerics danced around the monastery, throwing a ball back and forth to the sound of music. As with some other basic symbols in tattoo art, the ball more usually happens in specific contexts, some of them having to do with sports, while some are representations of planets and the Earth.

In conclusion, in the tattoo culture, “the ball” is used in different ways. From sports to weapons through geometrical objects, both 2-d and 3-d  its use is very common everyday tattoo art.