The term, as well as the symbol associated with it, is generally used as a warning so that people who are potentially exposed to the substances will know to take some precautions. The biohazard symbol was developed by Charles Baldwin in 1966, who is an environmental-health engineer working for the Dow Chemical Company on the containment products. 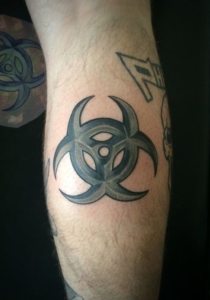 This warning symbol is also a popular tattoo, owing in part to its dangerous and interesting pattern, to its resemblance to tribal tattoo art, as well as to its meaning. It is globally recognized as “the potential presence of a biohazard,” which is a biological substance that poses a hazard to humans. As we already mentioned, the symbol was developed by the Dow Chemical Biohazards Research and Development team, under contract with the National Cancer Institute (NCI), after the NCI decided that a warning symbol to enhance biohazard containment was critically needed.

The team that formally developed the symbol, with such testing and redesign, eventually came up with the symbol that we all know today, satisfying their initial six requirements for it: that it be striking in the form to draw immediate attention, unique and unambiguous, as well as quickly recognizable and easily recalled, easily stenciled, symmetrical in order to appear identical from all angles, and acceptable to groups of varying ethnic backgrounds.

The biohazard symbol is a very widespread tattoo, especially on account of its intriguing graphic form, partly because of what it represents. When read literally, the biohazard symbol marks the wearer as a hazard to humans. A more likely, as well as average interpretation, is also one where the tattoo is of ironic significance in mind.