Home
Tattoo Meanings
The Portrait Of Abraham Lincoln: What Do These Tattoos Mean?

We all know who Abraham Lincoln is. He was an American statesman and also a lawyer who actually served as the 16th president of the U.S. He had this function from 1861 until his assassination in April 1865.

Lincoln was the leader of the nation through the American Civil War, which was the period of the bloodiest war and the greatest moral, constitutional, and political crisis. He managed to preserve the Union, abolish slavery, strengthen the federal government, and modernize the economy of the United States. 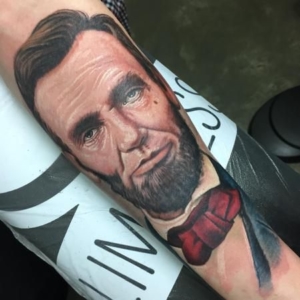 Abraham Lincoln was born on the 12th of February, in 1809. He was the second child of Thomas Lincoln and Nancy Hanks Lincoln. They were living in a one-room log cabin on Sinking Spring Farm, near Hodgenville, Kentucky.

Lincoln was the descendant of Samuel Lincoln. This person was an Englishman who migrated from Hingham, Norfolk to Hingham, Massachusetts in 1638. The grandson and great-grandson of Samuel started the westward migration of the family. They were constantly passing through New Jersey, Virginia, and Pennsylvania.

The paternal grandfather and namesake of Lincoln, Captain Abraham Lincoln, moved the family from Virginia to Jefferson County. Jefferson County is in Kentucky, and this happened during the 1780s. During 1786, Captain Lincoln was killed in an Indian raid. His children, including the eight-year-old Thomas, who was the father of Abraham, witnessed the attack. After that, Thomas worked odd jobs in Kentucky and in Tennessee as well. He did so before settling with his family members in Hardin County, Kentucky during the early 1800s.

Born in Kentucky, he grew up in a very poor family. He was self-educated, and he became a lawyer. His formal schooling was intermittent, totaling less than 12 months. But, he was an avid reader and retained a lifelong interest in learning. Some family neighbors and schoolmates recalled that he read and reread a lot of books.

He was the leader of the Whig Party, and state legislator and Congressman of Illinois. In 1849, he left the government in order to resume his law practice. However, as the Democrats were successful in opening the prairie lands to slavery, he reentered politics in 1854.

In that time, he became the leader in the new Republican Party, and he gained national attention during 1858. This happened because he debated the national Democratic leader Stephen A. Douglas during the 1858 Illinois Senate campaign. Then, he ran for President in 1860, sweeping the North and finally winning.

Southern pro-slavery elements definitely took his win as proof that the North rejects the Southern states’ constitutional rights to practice slavery. They started the process of seceding from the union. In order to secure its independence, the new Confederate States of America fired on the Fort Sumter. The Fort Sumter is one of the several U.S. forts in the South. Lincoln called up volunteers and militia in order to suppress the rebellion and restore the Union too.

Portrait tattoos always make up a surprisingly important part of the tattoo repertoire. The people that we often portray can come from all walks of life. Some of these people can be public and some private.

In American history, several images evoke as many emotional connotations as that of President Abraham Lincoln. Seemingly etched into the deep lines of his face, we can read his struggle to unite a divided country. We can also see his decision to abolish slavery and his early death at the hands of an assassin.

In more modern times, people associate him with slain civil rights leaders and the fight for freedom in general. The sixteenth President of the U.S., the Great Emancipator, remained an adored figure, long after his life abruptly ended.

Usually, people consider him one of the top three best United States’ presidents. Just like other great men, he is ubiquitously immortalized in tattoo forms. This is because of the inspiring life that he was leading.

Tattoos of Abraham Lincoln generally symbolize the distinguishing traits that he possessed. Such traits are justice, honesty, and intelligence. The ingenuity of Lincoln in navigating the Civil War and gaining the respect of his fellow-men in spite of a starkly divided country is also a part of his perennial legacy.

Tattoos that immortalize him are generally portraits or even caricatures of this great president. Important imagery, which includes the top hat and full beard of Lincoln, are both common images in tattoos. They evoke the essence of this former president.

Another significant element of an Abraham Lincoln tattoo is Lincoln’s quotes. There are a lot of recorded speeches that demonstrate his eloquent style. Tattooing one of his quotes is an easy way to pay your respect to this great man.

Creativity with such tattoos is definitely significant too. You should not hesitate to try something beyond a realistic and photographic tattoo. Instead, you can take your favorite design aesthetic and see how Lincoln can fit into it. You might simply surprise yourself with something truly spectacular.

Portrait tattoos are very common nowadays, and they probably have the greatest symbolism and meaning among tattoo lovers. This is because they often portray someone they truly love and appreciate.