On the surface, the “x” is a straightforward symbol that is often associated with a negative connotation. An “x” stands for something wrong, a warning against moving forward, or something that is not right, incorrect. However, this is not just a symbol. The “x” is bold and provocative. As a letter, it is connected to the daring and can suggest eroticism. It has also been recognized as a mark of a person instead of their name, a representation of an entire human, and their identity in a simple crossing of lines.

For instance, it can be number 10, date, or amount. The “X” is both a complicated and straightforward symbol that relies on the individual to assign significance and then decide how or if that significance is clarified to others. In this sense, the “x” is an incredibly personal tattoo design, validated only by the individual who receives it.

A large “X” can be illustrated as scratch marks, burns, or wounds in the skin, which creates an aggressive design that suggests battle. This can be a representation of past tragedies that have scarred or wounded the individual and affected them in some way and left them without a sense of healing. The degree of suffering can be shown in the design, depending on the degree of the wound. An “X” made of scar tissue can depict the opposite, a recovery from hardship, and the ability to move forward.

An “x” rendered like ink or paintbrush strokes may reveal an artist or writer. The plain symbol shows the individual’s passion for their craft and signifies how it encompasses their entire beings. There are also countless varieties of fonts that can be chosen for the “x” that significantly change the appearance of the symbol. Lines can be added to the top and bottom of the letter to create a Roman numeral, which suggests the number 10. The “X” can be placed in a box, leading to an association with the negative, the opposite of a checkmark.

Smaller symbols can be added into the lines of the “x” as well to create a more complex image. A heart or star shape incorporated into the “x” creates a fuller design adding a stylistic element that softens the abrasive nature of the crossing lines. The adding of marks into the “x” does not necessarily make the design more feminine and delicate, especially if these additions are sharp like horizontal lines add to each end of the crossing lines. On the other side, soft, curving edges, as found in the cursive form of the letter “x,” however, as opposed to straight lines, do add delicacy to the shape. The “X” shape can also be rendered as a compact block shape to be filled in with a pattern or another graphic or image.

In some instances, the “X’, serves as a tribute to the television show “The X-files.” The “X” in this way represents a symbol for science-fiction and an affiliation with the unknown and unexplained. In this design, the symbol, in this case, is blotchy and uneven and appears much like the lettering on an old facsimile.

X is considered as one of the most identifiable letters in the alphabet. X is not only the 24th letter in the alphabet, but also it is used in a variety of different instances. If you are interested in getting a tattoo of the letter X, there is probably something about it that you can identify with. Most people with the X tattoo may hold different meanings behind it since every tattoo design usually has a story to go along with it that further explains the marking.

The X tattoo has a different meaning attached to it. However, the essential purpose of the X tattoo is the one that you have for yourself. In this way, the tattoo is more creative and exciting, with a personal story of some sort to go along with it. Not everyone with a tattoo of the letter X will agree with your opinion, we all have our unique thoughts on the subject. Nevertheless, below are some of the most common meanings as reasons why people decide to get this tattoo.

The term ‘straight edge’ originates from a subculture of punk rock music. Unlike many of the ‘punk rockers’ that would abuse alcohol and drugs, this hardcore suit of rockers were against the use of any drugs. Hardcore straight edges had a real war against those who would use drugs, going as far as starting fights and becoming violent with alcohol, tobacco, or drug users. 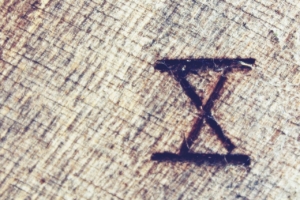 Members of this culture would often be vegan or vegetarians. Some of the hardcore straight-edge vegans would not use any products that were tested on animals, or any product that put animals in harm’s way to produce. From his start in the 1980s, straight edge punks evolved in three different ways. At first, it was just the local people in the music scene that was tired of seeing everyone wasted on drugs and alcohol. They wanted the scene to clean up its act. Years later, straight edge bands had formed and started to take the stage by storm, new members of this movement were created. By the 2000s, the straight edge was at an all-time high, changing its form once again to a more militant standpoint.

Even though these people have some left-wing tendencies, at the same time, they are also very conservatives in many aspects. Straight edge was said to be started by the band Minor Threat. They came out with a song called ‘straight edge,’ and since then, the ideals of the song and popularity rose, they adopted the name ‘straight edge.’ When asked about this new movement, the bandmates said they had no intention of starting a whole subculture. Then in the following year’s, several other bands jumped on the straight edge wagon, making the scene more reliable than ever.

Once the popularity caught on with this new scene, a band by the name of the Teen Idles emerged. One night when they were supposed to play a show in a bar, the bar manager realized they were all under the legal drinking age. To make sure the band was not getting served alcohol, the bar manager marked all of their hands with the symbol of an X. This signaled the bartenders not to serve alcohol to anyone with an X on their side because they are underage.

The band loved this idea so much that they took the idea and established it in clubs and venues all over the country. This was a way of letting the younger crowd come into the place, making them in the doors only if they have X’s on the back of their hands, which meant that they wouldn’t be able to drink within the premises. After that, the X symbol was being represented as a fashion piece. People had a tendency to mark their hands with X symbols to show that they were straight edge, which become the culture’s signature logo.

Straight edge bands then put X’s on the front of their album covers. The X was seen almost anywhere you can think when it came to straight-edge culture. They would even have sXe written in various places; this meant Straight X Edge. Three X’s in a row was another way of representing your love for sober living. Hardcore straight edge members then started to get tattoos with X’s or with weapons crossing each other to form an X. These hardcore straight edge groups even got violent. They would hang out at local gas stations and stores waiting for people to walk in to buy tobacco products or alcohol. When the customer would appear with whatever substance they bought, gangs of straight edge kids would attack them, causing bodily harm. Times have changed, however, and the straight edge scene is a lot more peaceful nowadays than it was before.